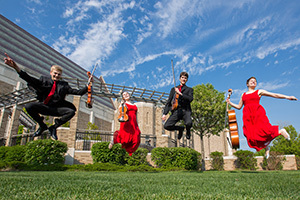 The 44th annual Fischoff Competition, the largest chamber music competition in the United States, will take place Friday through Sunday (May 12 through 14) in the DeBartolo Performing Arts Center at the University of Notre Dame.

The grand prize concert on Sunday (May 14) features two senior division gold medalists competing to become the 2017 Fischoff grand prize winner. The concert will also feature a performance by the junior division gold medal winner. The awards ceremony and concert recognize the achievements of nine ensembles that have successfully competed against 49 chamber music ensembles. More than $37,000 will be awarded in prize money, and the grand prize winner will perform a Midwest tour in the fall followed by performances at the 2017 Emilia Romagna Festival in Italy.

Established in South Bend in 1973, the Fischoff Competition is one of the most prestigious classical music prizes achievable today. This year, 49 ensembles were accepted to the quarterfinals round. Of all entries, musicians from 31 states plus Washington, D.C., and 29 countries were represented. By the competition’s end, there will be 104 performances over the course of five rounds.

The competition events will be streamed live from the Fischoff website. Last year more than 6,000 viewers from 69 countries watched the competition online. All events except for the awards and grand prize concert are free and open to the public. A schedule is available here.

Tickets for the awards and grand prize concert can be purchased at the DeBartolo Performing Arts Center box office or by calling 574-631-2800.