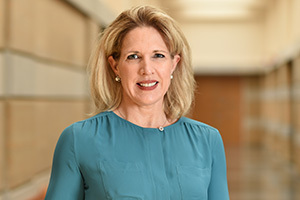 Maura Policelli has joined the Keough School of Global Affairs as executive director of the new Global Policy Initiative in Washington, D.C. She will provide strategic direction for the initiative, which aims to strengthen engagement with and influence in the nation’s capital and to provide new opportunities for students, faculty and alumni to further the university’s global mission and impact.

Policelli holds a Juris Doctor from Georgetown University and a bachelor’s degree from the College of the Holy Cross in Massachusetts. She has spent nearly 20 years working in Washington, D.C., in senior positions on Capitol Hill, at policy organizations and in the executive branch. Most recently, she served as chief of staff for Oxfam America, a global anti-poverty organization with affiliates in 90 countries.

The Global Policy Initiative — which is based at the Keough School but also aims to engage faculty, programs, alumni and students throughout the University — is an important step toward deepening Notre Dame’s profile in Washington and around the world, said Scott Appleby, the Marilyn Keough Dean of the Keough School.

“Washington is a center of global influence, where Notre Dame has a rich presence — with alumni working at every level of policymaking and with faculty and students learning and conducting research,” he said.

“The opening of the Keough School — with its imperative to produce students who are leaders and agents of change working toward integral human development — gives us an unprecedented opportunity to leverage our points of strength in Washington and create transformational new possibilities for students and the extended Notre Dame family and community.

“We’re grateful that Maura Policelli, with her extensive experience and understanding of the role of policy in working toward the greater good, will be our Washington-based partner in this effort.”

Before joining Oxfam America, Policelli worked for Democratic Leader Richard Gephardt and for Congresswoman Jane Harman, who — as the ranking member of the House Intelligence Committee — led efforts on Capitol Hill to respond to the terrorist attacks of 9/11. Prior to that, Policelli worked for Congresswoman Gabrielle Giffords, developing strategies for solar energy and immigration reform. In the Obama administration, she was first appointed to the U.S. Department of Education as senior adviser to the deputy secretary. She later served as the senior vice president of communications at the Export-Import Bank of the United States.