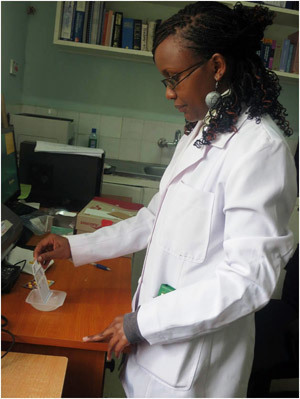 A Kenyan pharmacist uses a paper analytical device to test for counterfeit drugs.

Marya Lieberman, associate professor of chemistry and biochemistry at the University of Notre Dame, has collaborated with faculty and students to demonstrate advances in paper paper analytical devices (PADs) to test for counterfeit drugs. The promising low-tech solution has received broad attention in the scientific community. Lieberman’s work was featured in Chemical and Engineering News and presented recently at the American Chemical Society’s 244th National Meeting in Philadelphia.

This past June, Lieberman and graduate student Abigail Weaver were invited to present at a workshop in Nairobi, Kenya. The Gates Foundation and Grand Challenges Canada funded the workshop that brought U.S. researchers together with African academics and policy makers to survey state-of-the-art diagnostics designed for use in low-resource settings — such as clinics that do not have reliable electrical power. With Weaver, Lieberman demonstrated paper analytical devices for detection of counterfeit antibiotics, anti-malarials and anti-TB medications. Although the PAD is not able to quantify the amount of each pharmaceutical ingredient present, it distinguished pure amoxicillin and amoxicillin that had been adulterated with maize meal in the Kenya workshop.

Pharmacists and officials in Kenya are continually looking for counterfeit pharmaceuticals but frequently lack access to the complex testing equipment necessary to confirm a drug’s authenticity. The PADs will provide a workable alternative to ordinary laboratory tests because they combine a simple and inexpensive test with the powerful African cell phone network to enable both individuals and institutions to detect low-quality pharmaceuticals.

“We would whip out our paper devices and do tests right there on their desktops,” Lieberman said. Users can swipe tablets across the paper, which is prepared with different lanes to detect different ingredients and reveals the content with a color code. The device can detect both the desired active ingredients in the tablet and the presence of unauthorized fillers, a common problem in counterfeit drugs in developing countries. “These tests are possible because we’re making a smart material, where information on how to add the reagents is stored in the paper matrix and the test output can be read like a color bar code.”

Other researchers in the field first gained broad attention in a paper published by George Whitesides in 2007. Those include Paul Yager at the University of Washington, Seattle; Scott Phillips at Pennsylvania State University; and Richard Crooks at the University of Texas, Austin, whose group uses paper-folding origami to create multi-layered devices. Diagnostics for All (DFA), which holds licenses from the Whitesides lab, is developing a device to reliably measure the levels of two liver enzymes.

Lieberman and Goodson are members of the Eck Institute for Global Health, which provided funding for Lieberman’s work in Kenya and awarded a graduate fellowship to Weaver. The American Chemical Society also supported Weaver’s travel through the GREET program.