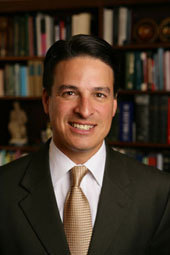 Paolo Carozza, associate professor of law at the University of Notre Dame Law School, recently returned from a weeklong fact-finding mission in Honduras. He was there as part of an Inter-American Commission on Human Rights (IACHR) delegation to observe that nation’s human rights situation following a June 28 coup d’etat that led to the ousting of Honduran President Manuel Zelaya.

“During our visit, we met with a broad range of state officials and with civil society groups on both sides of the conflict there, in various parts of the country,” Carozza said. “It is a difficult, contentious environment in which, unfortunately, the rule of law continues to suffer.”

Carozza is an elected member and past chairman of the IACHR, which promotes the observance and defense of human rights in the 35 Western hemisphere nations that are members of the Organization of American States (OAS). The OAS issued a statement calling for Zelaya’s return and said it would not recognize any other government.

The IACHR issued a preliminary report based on the delegations findings, and a final report is due out soon.

“The commission tried to emphasize that whether or not one sympathizes with the ouster of President Zelaya, those authorities of the state which exercise power have a strict obligation to respect and protect the human rights of the Honduran people,” Carozza said. “Since the events of June 28, the widespread practice of arbitrary detentions, the excessive use of force against protesters, and continued interference with freedom of expression in Honduras all contradict those responsibilities of the state.”

Carozza joined the Notre Dame Law School faculty in 1996. He is actively involved in the work of the Center for Civil and Human Rights (CCHR) at the Law School, and serves as director of the J.S.D. program in international human rights law, administered through the CCHR.

At Notre Dame, Carozza also is a fellow of the Kellogg Institute for International Studies, the Kroc Institute for International Peace Studies, and the Nanovic Institute for European Studies. Carozza earned both his bachelor’s and law degrees from Harvard, and pursued graduate studies at Cambridge University and at Harvard Law School as a Ford Foundation Fellow in Public International Law. After law school, he served as a judicial clerk for the Supreme Court of the Federated States of Micronesia and worked as an associate at the Washington, D.C., law firm Arnold & Porter.