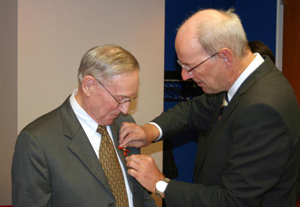 Donald P. Kommers, Joseph and Elizabeth Robbie Professor of Political Science emeritus and professor of law emeritus at the University of Notre Dame, received the Officer’s Cross of the Order of Merit of the Federal Republic of Germany Monday (Nov. 8) at a ceremony in the office of the German Consulate in Chicago.

The Cross of the Order of Merit of the Federal Republic of Germany, or “Bundesverdienstkreuz,” is the German government’s highest award, given to German citizens as well as foreigners for outstanding service in the political, economic, social or intellectual fields. 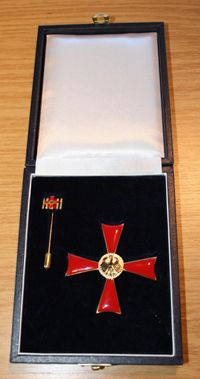 A member of the Notre Dame faculty since 1963 and a widely acknowledged authority on constitutional law and politics in modern democracies, Kommers has published numerous articles and 10 books on the American and German constitutional experiences. In 1998, he received an honorary doctor of laws degree from Germany’s Heidelberg University, only the fourth American to be so honored since the end of the Second World War. In 2008, he also won the Berlin Prize, a prestigious award which included a residential fellowship at the American Academy in Berlin, where he continued his research on Germany’s constitutional history since 1945.

In remarks at the Chicago ceremony, Onno Huckmann, the German consul general, praised Kommers’ three decades of scholarship in German and American constitutional law for having “remarkably enriched both the American and German law systems and building a bridge between our countries as few others have.”