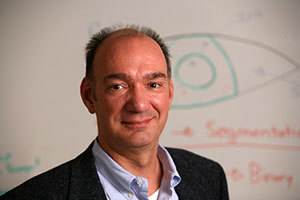 Kevin W. Bowyer, the Schubmehl-Prein Professor and Chair of the Department of Computer Science and Engineering at the University of Notre Dame, has been named a recipient of the 2014 Institute of Electrical and Electronics (IEEE) Computer Society’s Technical Achievement Award. Bowyer is being recognized for his “pioneering contributions to the science and engineering of biometrics” and will receive the award, along with the four other honorees, during a ceremony to be held in Seattle in June.

He directs the biometrics research group with Patrick Flynn, professor of computer science and engineering. Since 2001, Bowyer, his students and collaborators have been researching the feasibility of image-based biometrics and multibiometrics. They have collected the largest database of multimodal biometrics in the world, including first-of-their-kind comparisons of facial photographs, facial thermograms, 3-D facial images, iris images, ear and hand shapes and videos of human gait. Federal agencies have frequently used the group’s expertise and findings to objectively analyze commercial biometrics technologies.

He is serving as general chair for the 2015 IEEE International Conference on Automatic Face and Gesture Recognition, and has served previously as general chair of the 2011 International Joint Conference Biometrics and as program chair for the 2011 Automatic Face and Gesture Recognition conference, and was a founding general chair of the IEEE Biometrics: Theory, Applications and Systems conference series. He is the author of the recent Handbook of Iris Recognition and is also a member of the editorial board for IEEE Access, the society’s new, rapid publication, open access mega-journal.

A faculty member since 2001, Bowyer received his bachelor’s degree in economics from George Mason University in 1976 and his doctorate in computer science from Duke University in 1980.