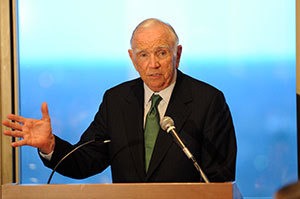 Donald and Marilyn Keough have made a $30 million gift to the University of Notre Dame to underwrite the construction of a new building for its international institutes.

To be named in honor of Notre Dame’s president, Rev. John I. Jenkins, C.S.C., the structure will be conjoined to Nanovic Hall, a recently announced facility to be built on Notre Dame Avenue south of the Hesburgh Center for International Studies.

“This wonderful gift is the most recent instance of Don and Mickie Keough’s tremendous generosity to Notre Dame,” Father Jenkins said. “I am truly humbled by their request to name this magnificent addition to our campus in my honor, and grateful beyond words for their gift.

“Don and Mickie’s generosity to Notre Dame over the years is unsurpassed, and Don’s visionary counsel to me and others at the University has been invaluable. This extraordinary gift will inspire us to become a more global university, bringing the world to Notre Dame and Notre Dame to the world.”

The adjoining Nanovic Hall will be the new home for the Departments of Economics, Political Science and Sociology, as well as the Nanovic Institute for European Studies. The combined complex will total approximately 170,000 square feet. Construction is expected to begin in spring 2015 and be completed by the start of the 2017-18 academic year.

“Don and Mickie have often said that any great university in the 21st century must be a global university,” said Thomas G. Burish, the University’s provost. “This gift will enable Notre Dame, in multiple ways, to become even more global than it currently is, including bringing together the key international institutes and related programs in a state-of-the-art facility that will promote collaboration and allow growth. Once again, the Keoughs will help transform Notre Dame.”

Donald Keough is chairman of the board of Allen & Company Inc., a New York investment banking firm. He retired as president and chief operating officer of The Coca-Cola Company in 1993. A longtime director of the company, he currently serves as an adviser to the board of directors. He has been a member of the University’s Board of Trustees since 1978, serving as chair from 1986 to 1991.

“Our family has been blessed in many ways, and that certainly includes the blessing of our longtime association with this great University,” Donald Keough said. “We believe in the power of Notre Dame to be a force for good in the world, and we know that the research and teaching that will be accomplished in this new facility will contribute to that end. We’re especially pleased that the building will bear the name of Father Jenkins, who has made the continued internationalization of the University a top priority.”

The Keoughs have made several other significant contributions to Notre Dame for a variety of educational and residential initiatives, including the Keough-Naughton Institute for Irish Studies; two endowed chairs in Irish studies; a summer internship program for Notre Dame students in Ireland; Malloy Hall, which houses the Departments of Theology and Philosophy; three library collections; the restoration of O’Connell House in Dublin; the Keough-Hesburgh Professorships for leading scholars who demonstrate a commitment to Notre Dame’s Catholic mission; and a men’s residence hall named in Marilyn Keough’s honor.