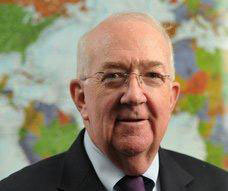 Hackett, former president of Catholic Relief Services (CRS), received the Laetare Medal, Notre Dame’s highest honor and regarded as the most prestigious honor awarded to American Catholics, in 2012. He had also received an honorary degree from Notre Dame in 2007. At present, he is a consultant for Notre Dame’s Initiative for Global Development.

Rev. John I. Jenkins, C.S.C., president of Notre Dame, said of Hackett’s nomination: “In announcing Ken as the recipient of Notre Dame’s 2012 Laetare Medal, I observed that his direction of the Church’s outreach to those most in need ‘blended administrative acumen with genuine compassion in a unique and exemplary way.’ I am confident that, upon his confirmation, he will bring that extraordinary blend of talent and virtue to his mutual service of our country and Church.”

Appointed president of CRS in 1993, Hackett served in that position for 18 years, retiring in 2012. He was succeeded as CRS president by Carolyn Woo, former dean of Notre Dame’s Mendoza College of Business.

During Hackett’s tenure as the sixth president of CRS, the agency redoubled its effort to engage the Catholic community of the United States in its worldwide work, by establishing a division that would focus on reaching out to dioceses, parishes, Catholic organizations, colleges and universities, and for the first time adding lay people to its board of directors. Now among the world’s most effective and efficient relief and development agencies, it operates in more than 100 countries, with a global staff of nearly 5,000.

If confirmed, Hackett will succeed Notre Dame alumnus Miguel H. Diaz as U.S. ambassador to the Holy See. Diaz, the University Professor of Faith and Culture at the University of Dayton, earned master’s and doctoral degrees from Notre Dame in 1992 and 2000, respectively. Hackett would be the 10th American ambassador to the Vatican since the United States established formal diplomatic relations with it in 1984.

Five years ago, Hackett also was instrumental in the establishment of a formal agreement between Notre Dame and CRS, which, while recognizing the autonomy of each organization, built on several collaborative projects that Notre Dame has undertaken with CRS, committing both Notre Dame and CRS to explore opportunities and engage such resources as staff, faculty, curriculum, materials, research and international experiences in global development and hunger relief projects.