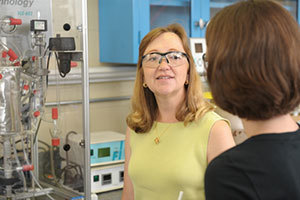 Joan Brennecke with a graduate student in her lab

Joan F. Brennecke, Keating-Crawford Professor of Chemical and Molecular Engineering and director of the University of Notre Dame Center for Sustainable Energy, has been awarded the E.V. Murphree Award in Industrial and Engineering Chemistry from the American Chemical Society (ACS) for outstanding research of a theoretical or experimental nature.

Established in 1955 by the ExxonMobil Research and Engineering Company, the Murphree Award recognizes fundamental research in industrial and engineering chemistry, the development of chemical engineering principles and their application to industrial processes. Murphree, a pioneer in chemical engineering and a former president of Exxon Research and Engineering, is known for his contributions to the fluid catalytic cracking process and his early involvement in the Manhattan Project.

Throughout her career, Brennecke has received numerous awards for her research, as well as for her contributions in the classroom. A member of the National Academy of Engineering Class of 2012, she received the 2009 Ernest Orlando Lawrence Award from the United States Department of Energy. She was also selected as the 2008 Julius Stieglitz Lecturer Award by the ACS and also received the 2007 John M. Prausnitz Award for outstanding achievement in applied chemical thermodynamics from the Conference on Properties and Phase Equilibria for Product and Process Design, the Professional Progress Award from the American Institute of Chemical Engineers and the 2001 Ipatieff Prize from the ACS. In 1991, the National Science Foundation honored her with the Presidential Young Investigator Award.