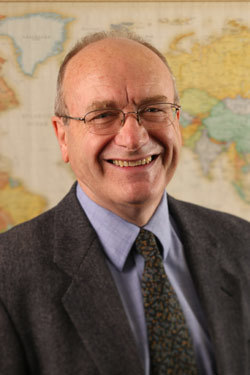 John Darby, professor of comparative ethnic studies at the University of Notre Dame’s Kroc Institute for International Peace Studies, died peacefully at home June 2 (Saturday) in Portstewart, Ireland. He was 71. A funeral mass will take place June 6 (Wednesday) in Portstewart.

Darby was beloved by faculty, staff, students and alumni of the Kroc Institute, where he began teaching in 1999.

An expert in peace processes, Darby directed the Kroc Institute’s Research Initiative for the Resolution of Ethnic Conflict from 2002-06 and the Peace Accords Matrix since 2004. Prior to joining the Kroc Institute, he taught at the University of Ulster and founded and directed INCORE (International Conflict Research Institute), a joint program of the University of Ulster and the United Nations University, Tokyo. Educated at Queen’s University in Belfast and the University of Ulster, he held visiting positions in Harvard and Duke universities and served as a fellow of the Rockefeller Foundation in Bellagio, Italy; the Woodrow Wilson Center in Washington; the United States Institute of Peace; and the Fulbright New Century Scholars Program. He is the author or editor of 15 books and 120 other academic publications in international conflict and peace processes.

“John Darby was a gift to Notre Dame, a wonderful colleague, a distinguished scholar, a genial and encouraging mentor to students, and a good friend to us all. Our love goes out to his family, especially to his wife, Marie, our dear friend, and his sons Patrick and Michael.

“John dreamed of discovering why peace accords fail so often, and of finding a way to improve their rate of success, as a path to building sustainable peace with justice in war-torn societies, beginning with his native Northern Ireland. He brought his dream to the Kroc Institute, where it flourished.

“The Kroc Institute’s Peace Accords Matrix database — a tool for scholars and peacebuilders — began as John’s idea, was formally launched in 2011 under his direction, and is being developed by a team of scholars and practitioners at Notre Dame and Uppsala University. Already mediators are applying insights from John’s project in planning peace accords to end two current wars.

“At the Kroc Institute, we will honor John’s legacy by continuing to develop this research project and by redoubling our efforts to educate and train the many students who will inherit his mantle. We will miss him greatly.”