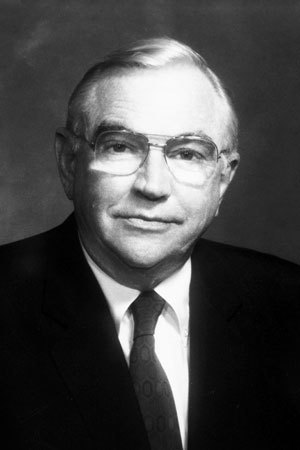 Donald R. Keough, chair emeritus of the University of Notre Dame Board of Trustees, chair of Allen & Company and former president and chief operating officer of the Coca-Cola Company, died Tuesday (Feb. 24) in Atlanta with family members at his side. He was 88.

“Don Keough was a celebrated business leader, a transformative philanthropist, a devout Catholic, a devoted husband and father, and a friend to so many who today mourn his passing,” said Rev. John I. Jenkins, C.S.C., Notre Dame’s president. “Don’s visionary leadership and generosity has had a profound impact on the University. He believed that we were put on earth to do good in the world, and his life tangibly demonstrated that faith. He has been a dear friend and cherished mentor whom I will miss terribly.”

“Don’s decades of dedicated service helped secure Notre Dame’s reputation as one of the world’s great institutions of higher education,” Richard C. Notebaert, chair of the University’s Board of Trustees, said, adding that, “Don loved his family, he loved Notre Dame, and he inspired all of us who had the privilege to know him.”

The Keough School of Global Affairs, the first new school to be established at Notre Dame in nearly a century, is only the most recent example of generosity to the University by Don and his wife of 65 years, Marilyn. In addition to Jenkins Hall, which will house the new school, the Keoughs’ benefaction has made possible Notre Dame’s Keough-Naughton Institute for Irish Studies; two endowed chairs in Irish studies; the summer internship program in Ireland; Malloy Hall, which houses the Departments of Theology and Philosophy; three library collections; the restoration of O’Connell House in Dublin; the Keough-Hesburgh Professorships for leading scholars committed to Notre Dame’s Catholic mission; and a men’s residence hall named in Marilyn Keough’s honor.

Keough remained actively engaged at Notre Dame throughout his life, participating in last month’s meeting of the Board of Trustees. He was also involved in plans for the 2017 opening of the Keough School and with the Keough-Naughton Institute’s role with the Irish government in next year’s centennial commemoration of the 1916 uprising.

Visitation will take place Monday (March 2) from 5 to 7 p.m. EST, and a funeral Mass will be celebrated Tuesday (March 3) at 10 a.m., both at The Cathedral of Christ the King, 2699 Peachtree Road in Atlanta.