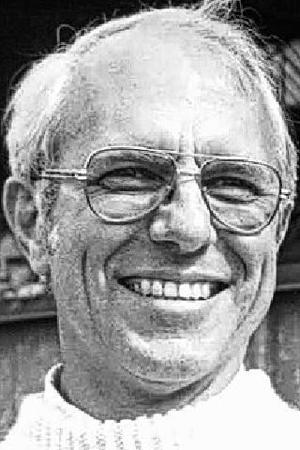 Bernard E. Doering, professor emeritus of Romance languages and literatures at the University of Notre Dame, died July 9 (Saturday). He was 91.

A member of the Notre Dame faculty since 1965, Doering was born in St. Louis, Missouri, where he attended McBride High School for a year before entering the postulancy of the Marianist religious order in Kirkwood, Missouri. After his graduation from the University of Dayton in 1944, he taught for seven years in Marianist high schools in Chicago, St. Louis and Milwaukee and in 1951 entered the Marianist novitiate for theological studies in Fribourg, Switzerland, where he eventually discovered that his vocation lay elsewhere. Before returning to St. Louis in 1955, Doering spent months hitchhiking throughout post-World War II Europe.

He earned a master’s degree in English from Washington University in 1955 and, a year later, while attending summer school at Laval University in Quebec, met Elizabeth Jane O’Connor (now Elizabeth Jane Doering, professional specialist emerita in the College of Arts and Letters) whom he married three years later, and who went with him to teach at Indian Springs School in Helena, Alabama, a private secondary school for boys that curiously required that all its students be from south and all its teaching staff from north of the Mason-Dixon Line.

In 1963, the Doerings left Indian Springs, and Bernard earned a doctoral degree from the University of Colorado in 1965, writing a thesis on what would become his principal scholarly interest for the rest of his life, “Jacques Maritain and French Literary Figures in the Political and Social Turmoil of 1920-1950.”

At Notre Dame, Doering soon became a popular and affectionately regarded teacher and mentor. Among the pioneers of the University’s international studies programs, he played an indispensable role in establishing and developing the Notre Dame program in Angers, France, in which more than 3,000 Notre Dame students have been enrolled.

One of those alumni, 1969 Notre Dame graduate Rev. Patrick Gaffney, C.S.C., now associate professor of anthropology at Notre Dame, said that “as a scholar, teacher and translator, Bernard combined professional competence, poetic fervor and spiritual insight in a way that brightened minds, nourished hearts and inspired imitation. The wisdom he sought and shared was founded on an alloy of conviction, compassion and courage of a sort that is rarer than celestial star dust.”

The recipient of numerous University awards for his teaching and service, Doering also wrote articles and essays in such journals as The Review of Politics, Commonweal, The New Oxford Review, Theological Studies and Communio. Books he wrote, translated and edited include “Jacques Maritain and the French Catholic Intellectuals,” “The Philosopher and the Provocateur: The Correspondence of Jacques Maritain and Saul Alinski” and “Jacques and Raïssa Maritain: Beggars for Heaven, a Biography by Jean-Luc Barré.”

Doering died at his home in South Bend, survived by his wife, their four children and 10 grandchildren. He died surrounded by his family and friends, sharing the Prayer of Saint Francis.

Doering has donated his body to the Anatomical Education Program of the Indiana University School of Medicine. A Mass in celebration of his life will be offered at 3 p.m. Aug. 13 (Saturday) in the Church of Loretto at Saint Mary’s College.

The family asks that memorial donations in his name be made to the Center for Hospice Care, 501 Comfort Place, Mishawaka, IN 46545.