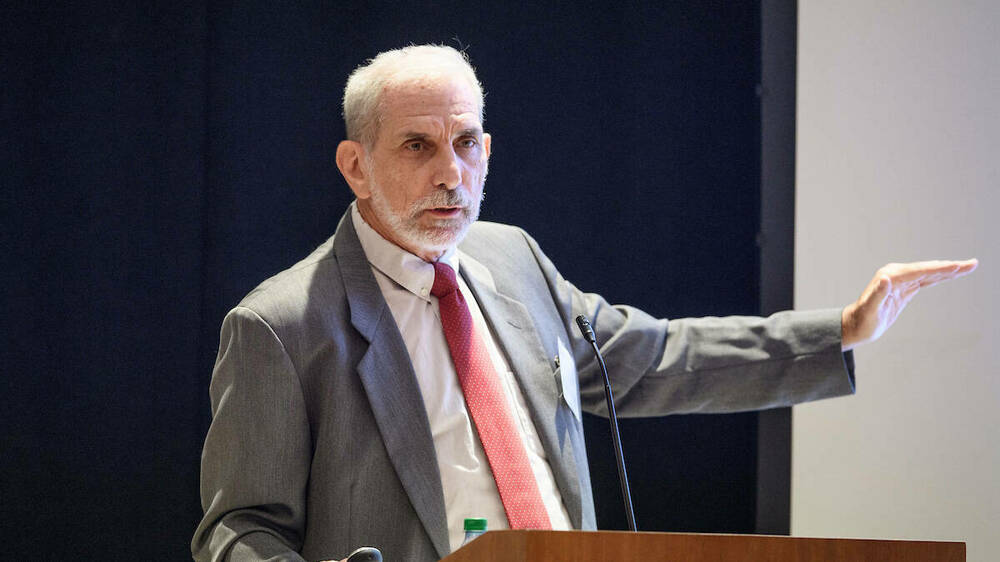 David Silberklang, senior historian at the International Institute for Holocaust Research at Yad Vashem in Jerusalem, spoke to Notre Dame students and the community Tuesday evening (Sept. 14) in the Carey Auditorium of the Hesburgh Library,  in an event co-sponsored by the University of Notre Dame’s Center for Social Concerns and Notre Dame International.

Silberklang was invited to give the center’s annual Rev. Bernie Clark, C.S.C., Lecture, which was created in 2009 to highlight issues and themes within the Catholic social tradition and to inspire students to live out Father Clark’s mission of promoting social justice.

William Purcell, acting executive director of the Center for Social Concerns, welcomed Silberklang and said the center was especially honored to have him speak this year, when it is focusing on a theme of human dignity.

“Starting the year with a lecture on how Jewish people assisted one another during the Holocaust is a good reminder that human dignity can be preserved even in situations where it’s violated,” Purcell said.

In his talk, “Responsible for Each Other: Mutual Assistance and Maintaining Human Dignity in the Holocaust,” Silberklang emphasized that in examining the Holocaust, we must look not only at the actions of the perpetrators, but those of the victims — and seek to understand them as agents in their own history.

“In understanding, or trying our best to understand, what it was they grappled with and how they tried to cope with what they were facing — and within that mutual assistance for each other where that was possible — we can approach understanding the Holocaust better,” he said. “Just as understanding the perpetrators has ramifications beyond the story of the Holocaust for all societies, so too does seeking to understand the victims coping or trying to cope and engaging in this mutual assistance in the most extreme and impossible circumstances.”

Silberklang also described the work of Yad Vashem, the World Holocaust Remembrance Center. Established by the Israeli Parliament in 1953, Yad Vashem seeks to commemorate, document, research and educate about the Holocaust.

Michael Pippenger, vice president and associate provost for internationalization, said the University is grateful for Silberklang’s presence on campus, which reaffirms the impact and strength of Yad Vashem’s partnership with Notre Dame.

“As institutions that promote scholarship in the service of resilience, understanding and the advancement of human dignity, our collaborations enable meaningful dialogue for the common good,” Pippenger said. “This benefits our students and faculty and deepens our participation in conversations of global import.”

Guests at the lecture were also invited to visit the Rare Books and Special Collections department of the Hesburgh Libraries, where the “Pessach Haggadah in Memory of the Holocaust” was on display.

This Haggadah — one of only 250 in existence — was illustrated by David Wander with calligraphy and micrography by Yonah Weinrib. It was published in 1985 as a portfolio of handprinted plates, which juxtapose imagery from the Holocaust with traditional Passover images and text.

The Haggadah was recently donated to Notre Dame in honor of Zygfryd and Helene Wolloch from their children and grandchildren.