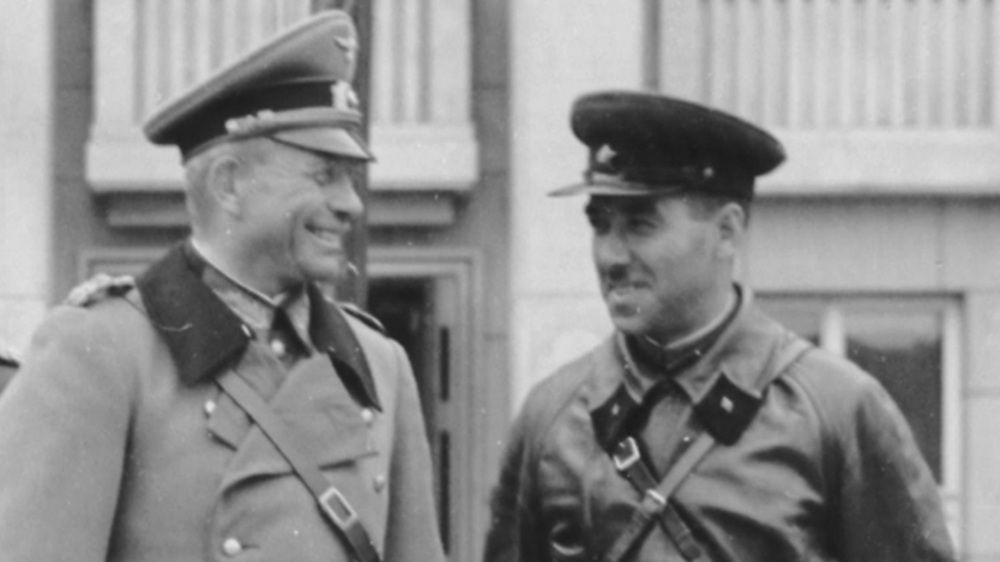 From 1933 to 1939, Adolf Hitler grew the German military from 100,000 soldiers to nearly 4 million and from a few dozen combat vehicles to a fleet of thousands of the most technologically advanced planes and tanks of the time.

Amassing that force in six brief years was only possible because of a secret German-Soviet partnership that began more than a decade before Hitler came to power.

In new research that is the first to elucidate exactly what occurred at secret facilities in the USSR, Ian Johnson, the P. J. Moran Family Assistant Professor of Military History at the University of Notre Dame, details the inner workings of the German-Soviet alliance that laid the foundation for Germany’s rise and ultimate downfall in World War II.

Johnson’s book, “Faustian Bargain,” traces the on-again, off-again relationship from the first tentative connections between the sworn enemies in 1919, made “almost before the ink had dried on the treaties ending the First World War,” to Hitler’s betrayal of Joseph Stalin and invasion of the USSR in 1941.

“The Germans and Soviets would use each other — at great cost — to remedy their own perceived military weaknesses,” Johnson writes.

For German military leaders, the alliance with the Soviets allowed them to get around the terms of the Treaty of Versailles, which dismantled the Imperial German Army after WWI and forbade Germany from developing or purchasing modern tools of war. A partnership with the Soviet Union meant rearmament and, someday, a war of revenge, according to Johnson.

During the first period of cooperation — formalized in 1922 when the nations signed the Treaty of Rapallo and initiated covert military operations — the Soviet Union hosted hundreds of German soldiers, engineers and scientists at secret military bases.

Johnson drew from 23 archives in Russia, Germany, Poland, England and the U.S., uncovering a paper trail that confirmed the alliance in great detail.

“I argue that Germany would not have been capable of starting a war, let alone beating many of its adversaries, without all of this secret work,” Johnson said. “Between 1922 and 1933, all of these factories, laboratories, testing grounds and training facilities were relocated to the USSR. Almost every tank that Germany started WWII with was based on engineering work done in the USSR. Most of the engineering teams from major German firms moved there. Seven of Germany’s eight aircraft manufacturers were doing research at Soviet facilities.

“Without these bases, Germany wouldn’t have had modern tanks or planes at all, and when the war began, they had some of the best in the world.”

The Rapallo Era ended nine months after Hitler assumed power in 1933 and, at his orders, the secret facilities closed one by one. While mistrust pervaded Soviet-German relations over the next six years, ties were never completely severed, Johnson writes.

In spring 1939, both Stalin and Hitler proved open to renewing cooperation and in August, the country’s two foreign ministers signed a treaty of nonaggression, known as the Molotov-Ribbentrop Pact.

“Secured against the prospect of a two-front war, Hitler invaded Poland on September 1,” Johnson writes. “Britain and France in turn honored their guarantees to Poland and declared war on Germany. The Second World War in Europe had begun, sparked by a German-Soviet pact.”

In the early days of the war, the Soviet Union supplied Germany with large quantities of raw materials, until the alliance began to crumble again in November 1940 when Hitler demanded more overt support from the USSR but refused to entertain Stalin’s counter-demands.

“Stalin thought he had leverage through this long partnership,” Johnson said. “He consistently ignored intelligence indicating that anything else would happen, so when the German invasion came in 1941, it was a horrific surprise with ugly consequences for both countries.”

Johnson notes that there are still disputes in Russia today over his and other historians’ accounts of the events and that examining this period is crucial — particularly because of its parallels to the current international landscape.

“There are still battles over the actual history today, which is one reason it’s important to look at this,” he said. “The other is that we live in a moment when the international order as it was established in 1945 is deteriorating. There are a lot of questions about how these institutions were set up after WWII and whether they’re working in a post-Cold War moment when we have a rising Russia and a rising China.

“The story I’m telling about the interwar period looks much the same. You’ve got two victorious powers from WWI, trying to find a way to maintain peace and to integrate rising powers into the international order to keep them happy. They failed to do so, disastrously, and the consequence was the bloodiest war in human history. So, understanding this moment is critical.”