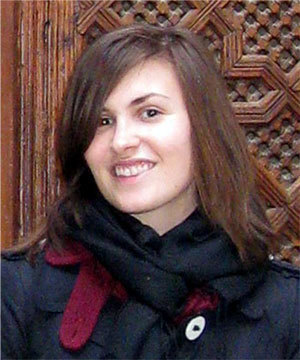 Molly Hayes, a 2008 graduate of the University of Notre Dame’s College of Arts and Letters, has been awarded a 2014 George Mitchell Scholarship.

Awarded to only 12 people every year, the George Mitchell Scholarship is sponsored by the US-Ireland Alliance. The nationally competitive award is named after the former U.S. Sen. George Mitchell, who served as chairman in the Northern Ireland peace process. The scholarship is designed to connect future American leaders with Ireland, and provides tuition, accommodations, and living and travel stipends.

Hayes, who studied English and Arabic while at Notre Dame, will use the Mitchell Scholarship to pursue a master’s degree in Irish literature at the National University of Ireland, Maynooth. She is the first Mitchell Scholar from Notre Dame since 2007.

A native of St. Paul, Minn., Hayes is currently the Kenya Desk Officer at the U.S. Department of State, where she led the Washington-based crisis response management for the September terrorist attack at Westgate mall in Nairobi, Kenya. She was a deputy coordinator for the Egypt Task Force during the Arab Spring. Hayes has also served as desk officer for Morocco, Western Sahara and Tunisia; as North Africa adviser to the Assistant Secretary of State for Near Eastern Affairs at the U.N. General Assembly; and as staff assistant to the Coordinator for Counterterrorism. While an undergraduate at Notre Dame, she studied abroad in Cairo in the 2006-07 academic year. With the help of the Office of International Studies, in 2008 she co-founded the ND-ABROAD initiative, which aims to promote security and dignity abroad through education in true cultural sensitivity. Hayes also was a part of restructuring Notre Dame’s orientation and re-entry programs, and she created a documentary on sexual assault and gender issues. She created a University Counseling Center support group for students who experienced trauma while abroad.

Hayes’ Mitchell Scholarship was made possible in part through her participation in Notre Dame’s Center for Undergraduate Scholarly Engagement (CUSE). CUSE provides undergraduate students in all the University’s colleges opportunities for research, scholarship and creative projects. The center also assists students in finding faculty mentors and funding and venues for the publication or presentation of their work, promotes applications to national fellowship programs and prepares them in their application process.

More information on CUSE is available online at cuse.nd.edu.