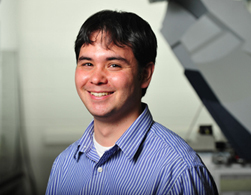 David B. Go, assistant professor of aerospace and mechanical engineering at the University of Notre Dame, was recently selected by the Air Force Office of Scientific Research (AFSOR) as one of 43 engineers and scientists who will participate in the 2011 Young Investigator Program (YIP).

The program, which is only open to engineers and scientists at U.S. research institutions who have received a doctoral degree within the last five years, recognizes those who “show exceptional ability and promise for conducting basic research.” This year’s YIP honorees will share approximately $16.5 million for research efforts over the next three years as outlined in their winning proposals.

As in previous years, competition for the award was very competitive. The ASFOR received 242 proposals encompassing a broad range of areas, including aerospace, chemical and materials sciences, physics and electronics, mathematics, information technologies, and life sciences.

Go, who joined the Notre Dame faculty in 2008, is investigating a phenomenon, ion-enhanced field emission, that occurs as discharges and plasmas are shrunk down to the microscale. Discharges have applications ranging from plasma televisions and environmental sensors to bioremediation and nanomaterial synthesis. However, they can be especially difficult to control, and it is equally difficult to craft their properties. Go is aiming to demonstrate that taking advantage of the unique physics occurring at the microscale could offer unprecedented control of discharge and plasma properties so that new discharge devices can be effectively tailored for specific applications.

His project will provide detailed theoretical modeling, computational simulations, and proof-of-concept experiments, with the research taking place on a number of scales — the atomic, particle and macroscale. Such a comprehensive approach will produce the most complete understanding of the physics of these microdischarges to date and set the stage for developing these new technologies.