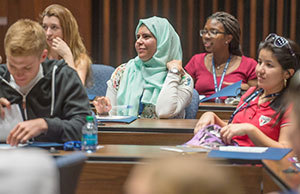 The University of Notre Dame is hosting its ninth Fulbright Foreign Language Teaching Assistant (FLTA) orientation for the upcoming academic year. Sixty teachers from 28 countries, representing 15 languages, are staying on campus Aug. 9-13 (Saturday-Wednesday) and will attend a series of workshops designed to enhance their teaching in the United States.

The orientation prepares the teachers, most of whom have never been to the U.S., for the academic year ahead, when they will go to an American college or university. Sessions during the orientation will cover topics ranging from academics, including successful language teaching methods, to cultural introductions such as shopping and tipping in America. The Fulbright teachers’ experience on campus will include dinner at Legends and lodging in Ryan Hall.

“The stay in Ryan Hall gives them a sense of what American students are experiencing,” said Brian Ó Conchubhair, director of the Notre Dame Center for the Study of Languages and Cultures and orientation director.

The FLTA program brings foreign language teachers from more than 50 countries to the United States. Notre Dame is one of only seven universities chosen from a highly selective process from the Fulbright Program to be a host institution. After the five-day orientation, FLTA teachers will leave to attend their host schools across the U.S. for the upcoming academic year. Six will stay at Notre Dame.

“The University of Notre Dame is a great campus. Getting a feel of what it’s like to be on a U.S. campus is really represented here,” said Marsha Frith, assistant director of the Foreign Fulbright Programs Division in the Fulbright FLTA Program. “Notre Dame has done a wonderful job of hosting a summer orientation program for Fulbright FLTAs for more than nine years. We appreciate the opportunity the FLTAs have to learn from faculty, staff and administrators and the tremendous benefit they gain from being at an institution with Notre Dame’s vast understanding of international students and foreign languages.”

The orientation is organized and funded by the Fulbright Commission, a program of the Institute for International Education, which is sponsored by the U.S. Department of State’s Bureau of Educational and Cultural Affairs.