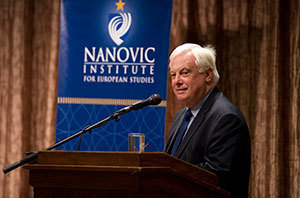 After health concerns caused Oxford Chancellor Christopher Patten (Lord Patten of Barnes) to step aside as the University of Notre Dame’s 2014 commencement speaker, he has been invited back by Notre Dame President Rev. John I. Jenkins, C.S.C., to serve in that role and receive an honorary degree at the 2015 ceremony May 17.

“We were very disappointed that Lord Patten was unable to attend last year, and we are equally delighted that he will join us this year,” Father Jenkins said. “He is a highly respected statesman in Great Britain and around the world who has taken on and helped resolve complex international issues, including the transfer of governance in Hong Kong and policing reforms in Northern Ireland, and he is a leading Catholic who led the planning for Pope Benedict’s very successful visit to Great Britain. His experience and expertise are certain to resonate with our Class of 2015.”

Patten, who was bestowed the title of baron in 2005, was elected chancellor of Oxford in 2003. He previously served as chancellor of Newcastle University and as chair of the BBC Trust.

A graduate of Balliol College, Oxford, where he studied history, Patten began his career in the research department of the Conservative Party, first as a desk officer and then as director. He was elected as a Member of Parliament for Bath in 1979, serving until 1992, including service as minister for overseas development in the Foreign and Commonwealth Office and in the Cabinet as secretary of state for the environment.

In 1992, he was named the 28th and last governor of Hong Kong, serving until its handover to the People’s Republic of China on June 30, 1997. In 1998-99 he chaired the Independent Commission on Policing for Northern Ireland, set up under the Good Friday Peace Agreement, and from 1999 to 2004 he was one of the United Kingdom’s two members to the European Commission.

In 2010, Patten was appointed by the prime minister to oversee and manage the preparations for Pope Benedict XVI’s visit to the United Kingdom, the country’s first papal visit in nearly 20 years. He recently was appointed to chair a committee advising Pope Francis on Vatican communications. He has been recognized as one of Britain’s most influential Catholics.

Patten is the author of six books, including “What Next? Surviving the Twenty-First Century,” “Not Quite the Diplomat: Home Truths about World Affairs” and “East and West,” which examines Asia and its relations with the rest of the world.

Patten and his wife, Lavender, have three daughters.