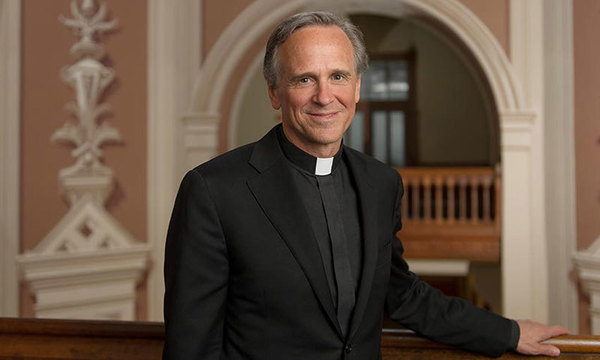 In a speech Friday (March 11) at the American Chamber of Commerce in São Paulo, Brazil, University of Notre Dame President Rev. John I. Jenkins, C.S.C., discussed the importance of Catholic education in an era of corruption and injustice, the University’s vision for growth in the country and its research related to the Zika virus.

Speaking to an audience of Brazilian education, foundation and government officials, Father Jenkins reflected on the value of Catholic education, speaking specifically of integrity, solidarity and care for our common home.

Alluding to the current corruption inquiries in Brazil – including the indictment Thursday of a former president and the possible impeachment of the current head of state – Father Jenkins said: “I am an outsider, but I know that these are difficult days for the great nation of Brazil. Corruption inquiries have reached the highest levels of leadership. We all know, however, that corruption is not a uniquely Brazilian problem. From Wall Street to Beijing, from Africa to Mexico, corruption is a terrible drag on economies and the source of injustice and disintegration in society. We must educate students who, whether in business, politics or any walk of life, speak the truth and do the truth. We must educate people of integrity.”

In speaking of solidarity, the Notre Dame president acknowledged the inequalities found in the United States as well as Brazil and all nations worldwide.

“I do not have solutions to offer you,” he said. “Yet at Notre Dame we strive to teach our students the value of solidarity – the sense that all human beings are sisters and brothers, and we must work to lift up the lives of everyone, rich and poor, educated and illiterate. No one is beyond the scope of our concern. For at Notre Dame, we believe this: If we live lives of service to those in need, we will live more joyful lives.”

In Pope Francis’ recent encyclical on the environment, he urged all citizens of the world to not only preserve the natural environment, but to also make the places in which we live true homes where all can flourish and find happiness – to care for our common home.

“The challenges are immense, yet we embrace challenges at Notre Dame – that is why we are called the Fighting Irish,” Father Jenkins said. “We must bring the highest levels of education, research and discussion to bear on making our common home – our world, our nations and our cities – sustainable communities where all can find a home and happiness. Notre Dame’s mission, and that of our partners in Brazil, is to produce future leaders armed to resist evil, trained to excel in business, or scholarship, or public service, or whatever path they choose, and prepared always to do good in the world, especially for the least of our brethren.”

The University recently received funding for additional scholarship support for Brazilian students to attend Notre Dame. Thirteen first-year students from Brazil are currently enrolled at Notre Dame, but 21 have been admitted for the coming academic year.

“Although the absolute numbers are not large,” Father Jenkins said, “the trajectory reflects a strengthening relationship between Brazil and Notre Dame that has arisen from the efforts of our Brazilian alumni, trustees and parents of current students, and the added staffing in Brazil that has made Notre Dame better known here.”

“Later this afternoon,” Father Jenkins said, “we are going to take a look at some prime real estate that represents an important step toward establishing São Paulo as Notre Dame’s first Global Gateway in the Southern Hemisphere. For too long, the United States and its best universities looked east to Europe and more recently to Asia for valued partnerships. Let me assure you, the compass at Notre Dame now points south. That orientation is critical for understanding the changing demographics of the United States. It is critical for higher education. And it is critical for the future of the Catholic Church in the United States. It is also critical in confronting economic and social issues of the Americas, South and North; and in supporting Catholic education in both hemispheres on how to come to terms with providing the great equalizer – a fine education like Notre Dame’s – to rich and poor alike.”

Father Jenkins also commented on Notre Dame research related to the Zika virus, which has reached pandemic proportions in Brazil. Led by the late biologist George Craig, University scientists have for decades extensively studied the female Aedes aegypti mosquito, the primary transmitter of the disease.

“While the world focused on the Zika outbreak in Brazil,” Father Jenkins said, “Notre Dame researchers have found something extraordinary; something close to home; something to remind us we all share the perils of life on our small, fragile planet.

“Although the Zika-carrying mosquito is not native to North America, researchers at Notre Dame have discovered a population of the same mosquitoes in the Capitol Hill neighborhood of Washington, D.C. Our team identified genetic evidence that these mosquitoes have over-wintered in Washington for at least the past four years, meaning they are adapting for persistence in a northern climate well out of their normal range. It seems that they can survive the winter, not far from the White House, by living in warm and damp subway tunnels nearby.

“I can see in the not-too-distant future researchers from São Paulo and South Bend collaborating with others from across South and North America to find ways to defeat the dreadful Zika virus. That’s something the Fighting Irish should fight for.”

Recalling the first words written about Brazil on May 1, 1500, by Pêro Vaz de Caminha to King Manuel of Portugal – “Que nao se pode calcular/It is incalculable” – Father Jenkins closed by saying of future partnerships between Notre Dame and Brazil: “The possibilities are incalculable.”