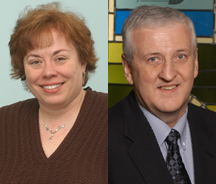 The University of Notre Dame’s College of Engineering has made two recent appointments.

Catherine F. Pieronek, most recently director of academic affairs and the Women’s Engineering Program in the college, has been named assistant dean for academic affairs. She had served in her previous position since 2006.

In addition to her continuing role as director of the Women’s Engineering Program, Pieronek is responsible for academic issues relevant to all undergraduate students throughout the college.She also has oversight for the college’s Minority Engineering Program and interfaces with offices across the University, including the Offices of Admissions, Financial Aid, Student Affairs, Student Activities and the Registrar.

During Pieronek’s tenure as director of the women’s program, the Notre Dame Collegiate Section of the Society of Women Engineers (SWE-ND) has grown into one of the college’s most prominent organizations, with membership increasing from a handful of women to more than 75 active members. SWE-ND has hosted a successful Region H Conference and won the society’s Outstanding Collegiate Section Award for a medium-sized section. The section also has been recognized by the University for its outstanding success, receiving awards for club of the year and outstanding program of the year.

A senior member of SWE, Pieronek also is a senior member of the American Institute of Aeronautics and Astronautics (AIAA), and a member of the American Society for Engineering Education (ASEE) and the Women in Engineering Pro-Active Network (WEPAN). Her focus on engineering education, particularly issues that affect the retention of women in engineering, has led to the publication of numerous papers and presentations at conferences sponsored by SWE, AIAA, ASEE, WEPAN and Frontiers in Education.

Pieronek was graduated from Notre Dame with a bachelor’s degree in aerospace engineering in 1984. She earned a master’s degree in aerospace engineering from the University of California at Los Angeles in 1987 and a law degree from Notre Dame in 1995. Prior to joining the College of Engineering, she served as director of law school relations at the University and as a senior systems engineer at TRW Space&Defense Sector in Redondo Beach, Calif.

Robert L. Alworth, most recently senior vice president in charge of international operations and global sourcing for S&C Electric Co. in Chicago, has been appointed director of the Integrated Engineering and Business Practices Program in the College of Engineering.

As senior vice president of S&C, he was responsible for the leadership of domestic and international business operations, technology development and acquisition, new product design, manufacturing operations, product marketing, and the development of an internal training curriculum and executive coaching program.

Prior to his tenure at S&C, Alworth worked in various divisions at General Electric Co. from 1974 to 1989, serving in a number of management positions with responsibility for manufacturing, sales, marketing and research and development.

A member of the Executives’ Club of Chicago and the Institute of Electrical and Electronics Engineers’ Power and Energy Society and Industrial Applications Society, Alworth holds a professional engineer’s license and currently serves on the Chicago Council on Global Affairs. He also has served on the advisory committee for the Northwestern University Manufacturing Engineering Program, as well as the board of directors for the Indiana Chamber of Commerce, Indiana Manufacturing Association, University of Southern Indiana Foundation and Peoples Bank and Trust.

Alworth replaces Robert M. Dunn, who has been named the managing director of the University’s Center for Nano Science and Technology and the Midwest Institute for Nanoelectronics Discovery.