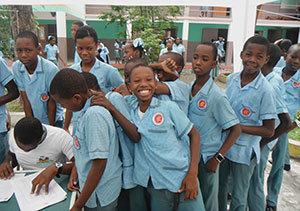 Preliminary testing of more than 850 schoolchildren in the Haitian town of Saut-d’Eau has shown only one child to be infected with the parasite that causes lymphatic filariasis (LF), a milestone in efforts to eradicate the debilitating disease from the island. The results, involving children from 38 schools in the community of 35,000 people 50 miles north of Port-au-Prince, mean that the University of Notre Dame Haiti Program likely will achieve its goal of eliminating LF, also known as elephantiasis, from Haiti by 2020.

“The infection rate of the population in this area was estimated at more than 44 percent when the initial pre-treatment surveys were conducted some 13 years ago,” said Rev. Thomas Streit, C.S.C., the lead researcher who founded the program nearly 20 years ago. Saut-d’Eau’s rates were among the highest in a nation where an estimated 10 percent were infected and the entire population of more than 10 million was at risk, the most in the Western Hemisphere. The recent results, by comparison, show an infection rate of barely 0.1 percent — more than 99 times lower than seen just over a decade ago.

Recently listed on the World Health Organization’s list of top neglected tropical diseases, LF is an attack on a person’s lymph system that leaves parts of the body grotesquely deformed. Tiny thread-worms colonize lymph vessels and prevent them from fighting bacterial and fungal infections, resulting in pain, fever, scarring, swelling, oozing abscesses and sometimes third-degree burns, usually in the legs, arms, scrotum, breast or part of the trunk. The disfigured person is unable to work and typically shunned by society.

Notre Dame and its collaborators in the fight against LF have conducted mass drug administration (MDA) across Haiti for three years to combat the mosquito-borne parasite as well as intestinal worms. World Health Organization protocols call for two more years of nationwide MDA. The work started earlier in Saut-d’Eau, where seven MDA cycles have been completed. Dr. Luccene Desir, the Haiti Program’s medical director, recently reported the preliminary results of the blood tests in Saut-d’Eau, which are more than 95 percent complete.

“This is a great milestone, and one to be very thankful for — not only that by God’s grace, this wretched disease is being eradicated from one of the more challenging environments in our hemisphere, but also for the faithful perseverance of Father Streit and our team, and for our donors, without whose respective vision and resources we would not be able to realize this success story,” said Earl Carter, managing director of the Haiti Program and assistant dean in the College of Science.