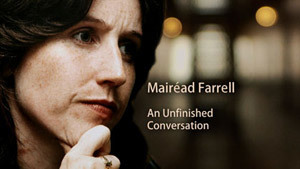 Patriot, terrorist or victim? The life and death of Mairéad Farrell, one of Ireland’s most high-profile Irish Republican Army members, have intrigued University of Notre Dame Professor Bríona Nic Dhiarmada for years.

The documentary film “Mairéad Farrell — An Unfinished Conversation,” showing at 7:30 p.m. Thursday (April 18) in Notre Dame’s Browning Cinema, is based on the personal relationship Nic Dhiarmada had with Farrell. The two met several times and talked about Farrell’s life journey from the middle-class upbringing in Belfast to her rise as an iconic IRA figure once imprisoned then gunned down at age 31. At the time of Farrell’s death in 1988, Nic Dhiarmada had been working on a book about her.

“I spent a year and a half interviewing Mairéad Farrell after her release from prison. My last interview was a week before her death in one of the most controversial incidents of the Troubles. The recent Peace Process and the passage of time has allowed me to go back to those very dark days in recent Irish history and try to understand the motivations and the ultimately tragic story of Mairéad Farrell,” Nic Dhiarmada said.

A concurrent faculty member in the departments of Irish Language and Literature and Film, Television, and Theatre, Nic Dhiarmada is both an award-winning writer and documentarian. Serving as guide in the film, she offers insight into who Farrell was and offers context for the times in which she lived.

Following the documentary screening will be a panel discussion with director Martina Durac, producer Vanessa Gildea and Nic Dhiarmada. The discussion will be moderated by Jim Collins, chair of Film, Television, and Theatre.

Nic Dhiarmada teaches “Screening the Irish Troubles” as a concurrent FTT and Irish Studies course. She has won numerous awards including the 2007 Best Documentary/Non Fiction Film Oireachtas Media Awards for “Ar Lorg Shorcha/Searching for Sorcha,” which she wrote and directed.