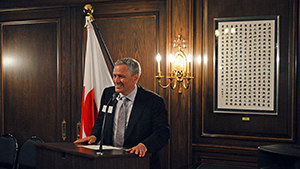 Michael E. Pippenger, Columbia University’s dean of undergraduate global programs and assistant vice president for international education, has been appointed vice president and associate provost for internationalization at the University of Notre Dame, Thomas G. Burish, Charles and Jill Fischer Provost, announced Friday (April 29). He succeeds J. Nicholas Entrikin, the inaugural occupant of the post, who will retire this summer.

“Michael is a recognized leader in the international area whose collaborative approach with faculty and administrators at Columbia and at many other universities throughout the world helped guide Columbia’s ambitious international strategy,” Burish said. “Among many things, he is drawn here by our new Keough School of Global Affairs and sees it as a major opportunity to expand Notre Dame’s global reach and impact. He is strongly committed to Notre Dame’s distinctive Catholic identity, and understands how it can provide a unique resource for Notre Dame’s future international efforts. The search committee and I are grateful that Michael has agreed to help the University build on the strong foundation that Nick Entrikin helped create to make Notre Dame an even more global university.”

Said Pippenger: “It’s an honor for me to be given this opportunity to serve Notre Dame and its global community. I look forward to supporting faculty, administrators, students, alumni and other partners in their efforts to enrich their lives — and the lives of others — through the work they do in the world. It’s an exciting time at Notre Dame, a time in which so many people are building upon the University’s mission and enhancing its legacy of global engagement to expand its reach internationally. It is my great privilege to be joining those committed to this critical work.”

Between 2002 and 2005, Pippenger was director of scholarship programs in the College of Arts and Science at New York University, where he ran all major national and international scholarship competitions. He also previously served for three years as senior program officer and world area manager of the Asia/Pacific Fulbright Program at the Institute of International Education.

Early in his career, Pippenger served in admissions at Haverford College and Carleton College, his alma mater, before earning his master’s and doctoral degrees in English literature from Indiana University.