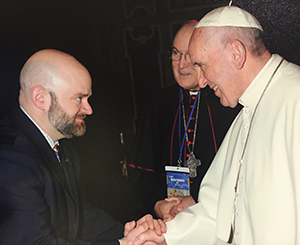 Carter Snead, William P. and Hazel B. White Director of the University of Notre Dame’s Center for Ethics and Culture and professor of law, has been appointed to the Pontifical Academy for Life, the pope’s principal advisory group on the promotion of the consistent ethic of life in the Catholic Church.

Founded in 1994 by Saint Pope John Paul II, the academy meets annually, holds conferences, publishes reports and collaborates with partners in the Vatican Curia and worldwide.

“I am honored and humbled to serve the Holy Father and the Church as it continues its efforts to defend and bear witness to the inalienable dignity of every member of the human family, born and unborn,” Snead said.

“We are thrilled Carter Snead, and, by extension, Notre Dame, has been given this opportunity to serve the Church in our efforts to build a culture of life worldwide,” said University president Rev. John I. Jenkins, C.S.C.

Snead traveled to Rome in March for the academy’s annual assembly, where he met Pope Francis in a private audience.

“This is a wonderful honor and a powerful example of Notre Dame’s continued service to the Church both locally, nationally and at the Vatican,” said Rev. William M. Lies, C.S.C., Notre Dame’s vice president for mission engagement and church affairs.

The academy’s 110 members are drawn from all over the world and from a wide variety of academic fields, including medicine, science, law, public policy, philosophy and theology. Snead, one of 12 Americans in the academy, is the second Notre Dame faculty member to be appointed, joining John M. Finnis, Biolchini Family Professor of Law, who was appointed in 2001.