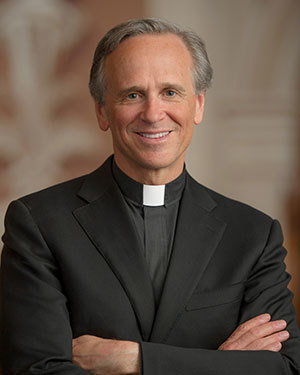 Calling recent insults to Mexico and its people “churlish, insulting political theater,” the president of the University of Notre Dame, Rev. John I. Jenkins, C.S.C., said Friday (July 8) that he is dedicated to strengthening the University’s presence in that nation’s academic, government, corporate and Church sectors.

Speaking in Mexico City at a meeting of business and university leaders, Father Jenkins compared the current attacks on Mexicans to the contempt directed at other immigrant groups in the United States in the past.

“The vitriol directed at the Irish … and later the Italians, and other waves of immigrants to the United States, sadly is not a thing of the past; certainly not for Mexicans in the United States who have been slandered in extraordinary ways, as has Mexico itself,” Father Jenkins said. “It is churlish, insulting political theater, for certain. But it is not only that. It suggests that the United States distance itself from Mexico at just the time that our nations are most positively engaged with each other and poised to reap the benefits of robust trade, industrialization and entrepreneurship.”

Father Jenkins announced the opening of a Notre Dame office in Mexico City as the first step in a planned expansion of ties between the University and Mexico. Similar to comments he made earlier this year in South America, the Notre Dame president said: “Like many universities in the U.S., Notre Dame first looked east to Europe and more recently to Asia for valued partnerships. Let me assure you, the compass at Notre Dame now points south.”

“Notre Dame is excited by the promise of innovation and applied research in collaboration with Mexican businesses and universities. In the long run, all of that may very well buttress economies and help people out of poverty in both of our countries.”

Father Jenkins quoted from Pope Francis, who early in his papacy said: “We are a single human family that is journeying on toward unity, making the most of solidarity and dialogue among peoples in the multiplicity of differences.”

“As a Catholic institution guided by the Church and inspired by Francis,” Father Jenkins said, “Notre Dame celebrates the interdependence and unity of peoples and nations. It informs our outreach to our neighbor Mexico, in particular.

“We recognize that Mexico has one of the most important economies in the world, that you are one of the United States’ most important trading partners, that you have a rich, enduring culture and faith, and some of the best universities in the world. In short, Mexico is indispensable. Our futures are joined at the border, not divided by it. Notre Dame knows it and wants to be a part of that future.”

Father Jenkins was joined on his visit to Mexico by several other Notre Dame officials, including Thomas G. Burish, Charles and Jill Fischer Provost, and Nick Entrikin, vice president and associate provost for internationalization. The trip included a public event titled “"Global Forum: Latin America":http://globalforum.nd.edu/,” a meeting by Burish with Roberta S. Jacobson, the U.S. ambassador to Mexico, and with various academic and business leaders.