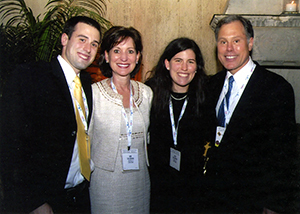 The Callaghan family. From left, Patrick, Kim, Katie and John.

University of Notre Dame alumnus Dr. John J. Callaghan and his wife, Kim, have made a $3 million gift to his alma mater to endow the Fighting Irish men’s tennis head coaching position. The gift will provide stability and resources for the long term and create funds for use within the department.

“In light of its long-term impact, there is no greater gift to an athletic program than the one that the Callaghans have made by their extraordinarily generous decision to endow the head coach of our men’s tennis program,” said Jack Swarbrick, vice president and James E. Rohr Director of Athletics. “Generations of future tennis players at Notre Dame will be indebted to them.”

“Any gift of this magnitude to the University is incredibly special, but the personal connection with John and Kim’s son Patrick, being a relatively recent men’s tennis student-athlete, makes this particular gesture unique and humbling,” Sachire said. “I can’t thank them enough for this gift to our program, as it will continue to ensure that future members of the men’s tennis team will have the opportunity to pursue excellence on the court and in the classroom, and ultimately develop into tremendous leaders during their time at Notre Dame.”

A graduate of the Loyola University’s Stritch School of Medicine in Chicago, Callaghan is the author or co-author of more than 345 peer-reviewed papers and has been the principal investigator on funded grants from the National Institutes of Health, the Orthopaedic Research and Education Foundation and the Veterans Administration. He has served for more than a quarter century in the U.S. Army and Veterans Administration health care system and twice has been named teacher of the year by the Walter Reed Army Medical Center.

The Callaghans are the parents of two Notre Dame graduates. Patrick earned his bachelor’s degree in 2010 majoring in economics and political science and was a four-year monogram winner on the Irish tennis team. He earned his law degree from the Northwestern University School of Law and is an attorney with the international law firm McDermott Will & Emery. Katie is a 2012 graduate with a double major in theology and pre-professional studies (pre-med). She was active in the Young Life College ministry at Notre Dame and will graduate in May 2017 from the Vanderbilt University School of Medicine.

“Kim and I and our children, Patrick and Katie, feel fortunate to be able to give back, in this way, to the University of Notre Dame for all of the opportunities it has provided us in our lives,” John Callaghan said. “Patrick’s experience during his four years on the tennis team under the mentorship of Coach (Bob) Bayliss and Coach Sachire provided lifelong skills that extended far beyond the tennis courts of the Eck Center.

“We recognize that endowing the men’s coaching position will ensure the same mentoring experience for all men’s tennis student athletes in the future.”

A three-time All-American at Notre Dame, Sachire joined the coaching staff as an assistant in 2006 and was named the seventh head coach in the program’s 91-year history in 2013. In his first season, he led the Irish to a No. 13 national ranking, and in his second year he directed the development of junior Quentin Monaghan, who advanced to the NCAA singles semifinals.

Sachire remains one of the top players in Irish tennis history. He is the only Notre Dame player ever to win 30-plus singles matches in all four of his collegiate seasons and one of only two to earn four invitations to the NCAA singles championship. One of three Notre Dame players ever to be a three-time All-American, he finished in the national top 40 in singles four times and on five occasions appeared at a career-high of No. 2 in the Intercollegiate Tennis Association’s national singles rankings.

After graduating from Notre Dame, Sachire played professionally for five years and was an assistant coach at Baylor University before returning to the University and joining the Irish staff.