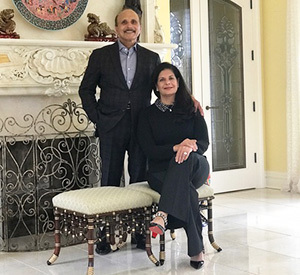 Rafat and Zoreen Ansari and their family, of South Bend, Indiana, have made a $15 million gift to the University of Notre Dame for the creation of an institute dedicated to the study of religion around the world.

“The need for people of faith to focus on what unites us rather than on what divides us has never been more urgent,” said Rev. John I. Jenkins, C.S.C., Notre Dame’s president. “This extraordinary gift from an esteemed local Muslim family, longtime friends of Notre Dame, will allow us to bring together scholars of the first order to foster dialogue and deepen understanding. We are immensely grateful to the Ansaris for making this aspiration a reality.”

The Rafat and Zoreen Ansari Institute for Global Engagement with Religion will be a part of Notre Dame’s new Donald R. Keough School of Global Affairs. Through research, teaching, outreach and interaction with religious communities worldwide, the institute will be a center of public deliberation and education about all religions. In particular, faculty will study how religious teachings, traditions, history, practice and thought inform the rapidly shifting patterns of global migration, conflict and peacebuilding, political culture and human development.

“The various roles of religions in alleviating suffering, accompanying the migrant and the refugee, serving the poor and reducing violent conflict are far less understood and publicized than the havoc created by a tiny minority of deluded religious extremists on every continent,” said R. Scott Appleby, Marilyn Keough Dean of the Keough School. “The Ansari Institute intends to change the conversation about religion – not by denying the troubling aspects of religious expression, but by directing attention to the vast good done by religions, and the even greater good they might accomplish in partnership with universities and other public and private institutions.”

The Ansari Institute will appoint faculty members who study the roles religions play in the public sphere and in crucial sectors such as health care, education and the economy. They also will focus on the distinctive – and often overlooked – contributions religions make to the common good. In addition, the institute will create fellowships for promising graduate students and organize a series of conferences convening the foremost leaders, practitioners and thinkers engaged in inter-religious and religious-secular dialogue about issues of pressing social concern.

Notre Dame parents, Rafat and Zoreen Ansari moved in 1980 to South Bend, where they raised their three children – Sarah, Adam and Sonya. Their passion for the Ansari Institute is a reflection of their hope that it will help foster partnerships globally and locally, and that communities large and small – from South Bend to Jerusalem – can be brought together through a shared understanding of certain guiding principles inherent in all the world’s religions.

“Notre Dame is well positioned to understand and enhance the role of religions and religious people in addressing systematic problems like poverty and violence – something we care about deeply,” the Ansaris said. “Having raised our family and built our lives in this community, so close to Notre Dame, we determined that now is the ideal time to partner with the University in this new way.”

The Keough School of Global Affairs is the first new school or college at Notre Dame in nearly a century. Founded in 2014 and named in honor of Notre Dame life trustee Donald R. Keough, the Keough School will offer undergraduate programming and a two-year professional master of global affairs degree to prepare students for skilled, effective and ethical leadership in the public and private sectors.