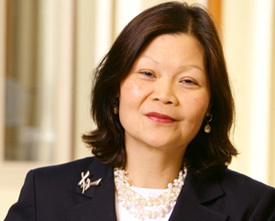 The Notre Dame Alumni Association has named Carolyn Y. Woo, the Martin J. Gillen Dean of the University of Notre Dame’s Mendoza College of Business, as an honorary alumna.

Woo is planning to leave the University on Jan. 1, 2012, to serve as president and CEO of Catholic Relief Services (CRS).

The presentation was made Dec. 16 by Dolly Duffy, executive director of the Notre Dame Alumni Association. Representing the association’s board of directors were Notre Dame alumni Chris Putt, the regional director for Indiana; and Dick Nussbaum, a past board president.

“Dean Woo encapsulates all of the achievements and qualities we hope our alumni aspire to once leaving Notre Dame,” Duffy said. “Her enduring faith and dedication to educating each student deserve this recognition from the alumni family.”

Woo is the 37th recipient of honorary alumni status. She assumed the deanship of Mendoza College in 1997 and the undergraduate business program has been ranked No. 1 by Bloomberg Businessweek for the second consecutive year. During her tenure, the college has also received top rankings for its MBA and Executive MBA programs.

“There are no words to describe the depth of gratitude that I feel for the experiences that I and my family have gained during our years at Notre Dame,” Woo said. “Foremost is the growth in faith and a sense that God is very real as He blesses, guides, and empowers us on our journey to serve and honor Him. Contributing to this growth are my wonderful colleagues and friends who oftentimes remind me of how very good God is, because I see Him in them and how they live their commitments and care for each other.

“For me, I move forward to follow the mission and mandate of Notre Dame: to trust in God, to share our blessings, and surrender ourselves for bringing about the kingdom of God here and now.”

As the head of CRS, Woo will lead the official international humanitarian agency of the United States’ Catholic community. Woo served on the CRS Board of Directors from 2004 until 2010 and will become the seventh chief executive of the organization since it was founded in 1943. She will succeed Ken Hackett, who is retiring after leading CRS for the past 18 years.

Woo was born and raised in Hong Kong, educated by the Maryknoll Sisters of Ossining, and immigrated to the United States to attend Purdue University, where she earned a bachelor’s degree in economics with highest distinction and honors, a master of science in industrial administration with recognition as Krannert Scholar, and her doctoral degree.

Woo previously served as associate executive vice president for academic affairs at Purdue University. She joined Purdue as assistant professor in 1981, became full professor in 1991, and directed the Professional Master’s Programs in the Krannert School of Management from 1993 to 1995.