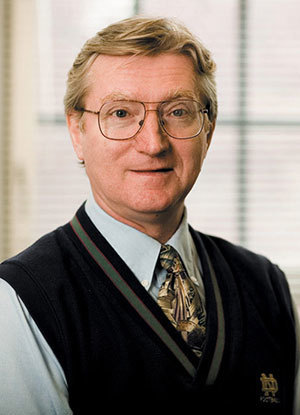 Wolfgang Porod, Frank M. Friemann Professor of Electrical Engineering at the University of Notre Dame, will be a featured panelist for a session titled “Nanoelectronics for Renewable Energy: How Nanoscale Innovations Address Global Needs” at the annual meeting of the American Association for the Advancement of Science (AAAS) Thursday-Monday (Feb. 13-17) in Chicago.

Thousands of leading scientists, engineers, educators, policymakers and journalists from around the world gather at the annual meeting to discuss recent developments in science and technology.

Porod will address “Nanoantenna Thermocouples for Energy Harvesting.” He will focus on energy harvesting in the long-range regime of the solar spectrum, which cannot be exploited by solar cells due to band gap limitations of photovoltaics. His panel will discuss an alternative physical mechanism based on the wave nature of the electromagnetic radiation. In particular, Porod and his panel will discuss nanoantenna-coupled thermocouples for the long-wave infrared regime.

Similar to radio waves, an antenna captures the electromagnetic radiation. Because of the short, micron-scale wavelength of the infrared radiation, such an antenna has to be engineered on the nanometer scale. The radiation-induced antenna currents lead to local heating effects, which can be harvested in nano-scale thermocouples. For efficient energy harvesting, the hot junction of the thermocouple has to be placed at the feed point of the nanoantenna, where the heating effect is strongest. Several thermocouples can be placed in series to form a thermopile in order to maximize the amount of harvested energy.

As director of Notre Dame’s NDnano, Porod oversees research programs in such areas as nanomaterials, new energy harvesting technologies and the interface between biological systems and nano-scale structures.

Patrick Regan, a science writer and editor at the Technische Universität München, and William Gilroy, a Notre Dame assistant director of public relations, are co-organizers of the “Nanoelectronics for Renewable Energy: How Nanoscale Innovations Address Global Needs” panel.