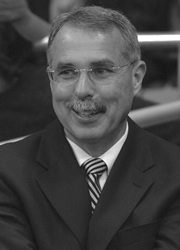 University physician Dr. James Moriarty can claim a major victory for boxing…without ever throwing a punch.

Anything we could do to make it safer was a good idea,said Moriarty, a 19-year ringside physician, of the studys purpose.We were taking a real riskif wed found negative results with this testingIm sure Bengal Bouts wouldnt exist.

For the original study, Moriarty tested 82 boxers in the weeks leading up to the tournament. He gauged their reaction time, memory and learning. He then performed the same test on the subjects within two hours of exiting the ring.

Only in cases where the referee had stopped the match did any decline in these basic functions occur.

We were relieved, we were happy. We felt validated,Moriarty said.I dont claim to be an apologist for boxing. But it certainly makes you more confident that youre identifying people that have problems.

Moriarty said that student and organizer support was integral to the studys success. Those involved understood that the study wouldreally help their cause.

The only thing worse than negative data is having no data,he said.The study proves that Notre Dames precautions and safety measures are working, according to Moriarty. Most importantly, boxers are required to be in top shape before stepping in the ring. This involves months of rigorous training, forming what Moriarty claims are some of thebest athletes on campus.Another precaution is training referees to stop any match where one athlete shows unfair dominance over the other.

Moriarty admitted that his study could not be considered representative of all amateur boxing because Bengal Bouts participants have fewer rounds and less exposure in the ring.

As a Notre Dame undergraduate, Moriarty had little interest in long-standing Bengal Bouts, now in its 76th year. But as a first-year University physician, he substituted at ring-side for an absent colleague. After treating a knock-out and dislocated shoulder within the first two roundsunusual for a tournament that encourages matches to be called on pointsMoriarty was hooked.

Boxing is a throwback to what we once were, to the physical nature of our emotion,he said.(If youre) a young male, there will always be a bully and one will always have to defend ones self. Boxing is a ritual experience, giving participants the opportunity to do that in a controlled setting. A lot of guys dont get to that level: physical exhaustion where youve got nothing left to give.