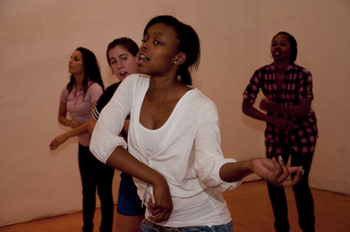 What do you think of when you hear “stepping” or “step-dancing”? If Irish dancing comes to mind, think again. Notre Dame First Class Steppers President junior Brittany Suggs explains what stepping really is.

“Stepping, or step-dancing, is a form of percussive dance in which the participant’s entire body is used as an instrument to produce complex rhythms and sounds through a mixture of footsteps, spoken word, and hand claps,” Suggs said. “With roots in both South Africa and pre-Civil War America, stepping has a rich history.”

One major difference between step and other forms of dancing is that step does not require or rely on music, according to Suggs.

“While step may occasionally use music to add to the performance, step is different from other forms of dance in that the greatest reliance on beats, sounds, and rhythms depends on the ability of the performers to create these elements using their bodies versus using music alone,” Suggs said. 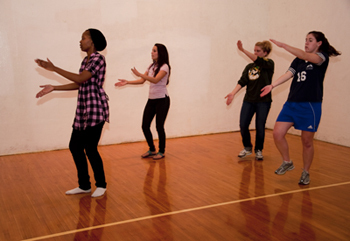 Step’s unique technique can be challenging, but many of the team’s members were able to pick it up after coming to campus with no prior experience, Suggs said.

First Class Steppers differs from other dance groups on campus in that its performances seek to spread understanding about the step tradition in the community, according to Suggs.

“The mission of the First Class Steppers is to educate the community of the University of Notre Dame, as well as greater area of South Bend, about the African-American tradition and culture of step dancing,” Suggs said.

This year First Class Steppers intends to broaden its community involvement and work more with other performance groups, Suggs said.

“Some of the goals for First Class this year include expanding our involvement in activities outside of step performances, such as service and fundraising, taking on new and challenging step performances that differ from performances from previous years, collaborating more with other dance groups on the Notre Dame, St. Mary’s, Holy Cross, and IUSB campuses, building an even greater level of team unity, and trying new step techniques and experimenting with innovative ideas when creating performances,” Suggs said.

First Class Steppers usually practices for four hours per week and plans to perform once or twice each month. Past performances have included Black Images, Welsh Family DanceFest, Fiestang, Latin Expressions, and many more, according to Suggs.

“One of our new events for this year tentatively holds the title of ‘Dancing Monsters of Notre Dame,’ in which First Class will be collaborating with other dance groups, such as Project Fresh, Troop ND, and TransPose, to create a gigantic clinic featuring different choreographed dances that incorporate various dancing styles and techniques,” Suggs said.