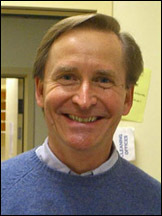 University of Notre Dame astrophysicist Peter Garnavich and a team of collaborators have identified a supernova caused by the collision of two stars.

They made a detailed study of the 234th supernova discovered in 2006, called2006gz,and found convincing evidence that the explosion resulted from the merging of twowhite dwarfs.The thermonuclear destruction of a white dwarf is called a type Ia supernova and was crucial in the discovery of the accelerating universe and dark energy.

White dwarf stars are the remnant cores of stars like our Sun and contain mostly the elements carbon and oxygen. White dwarfs can explode if their mass is increased and reaches a critical 1.4 times the mass of the Sun. It was believed that type Ia supernovae result from a white dwarf stealing mass from a Sun-like star to reach the unstable mass limit. But supernova 2006gz was different. Two white dwarf stars in orbit about each spiraled together and combined to exceed the mass limit.

We have used supernovae to discover dark energy, yet we do not know exactly how the explosions happen,Garnavich said.It now looks like there are at least two ways of making a type Ia supernova.

The team studied supernova 2006gz with telescopes in Arizona and modeled the explosion with a computer program developed in Oklahoma. From the first data it was clear that this was an unusual event. The supernova appeared to be rich in carbon which is rare in most type Ia supernovae.

Jose (Prieto, a student at Ohio State University) and I looked at the first spectrum and we both thought there was something screwy with this guy,Garnavich said.

While carbon makes up most of a white dwarf, it is nearly completely fused to heavier elements in the explosion. But theory predicted substantialunburnedcarbon would be found if the supernova was triggered by a merger of white dwarfs.

Supernova 2006gz was also brighter than expected for a single white dwarf explosion. There was more energy than can be explained by a 1.4 solar mass white dwarf, meaning there had to be two stars with the sum of the masses over the limit. Although intrinsically bright, the supernova occurred more than 300 million light years away in a spiral galaxy called IC 1277, so at peak, it was still 10,000 times fainter than the human eye can see without the help of a telescope.