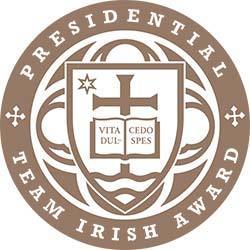 Waste Warriors, a team of individuals within the University of Notre Dame’s Campus Dining division, received a Team Irish Award in September.

The Presidential Team Irish Award program provides a special opportunity to publicly recognize staff teams that exemplify the University’s core values on behalf of their department and the University. The public recognition of a significant accomplishment, collaboration or initiative occurs during home football games.

Presidential Team Irish Award recipients collaborate on a project, process or initiative that significantly advances the University’s mission, organizational goals, and/or departmental goals while exemplifying the University’s core values of integrity, accountability, teamwork, leadership in mission and leadership in excellence.

The Waste Warriors identified an opportunity to reduce the amount of waste generated by staff during production. After hours of meeting and planning, the LeanPath program was introduced in late October, and three measuring devices installed to record all waste destined for the landfill. The devices were placed in high-volume areas such as North Dining Hall, South Dining Hall and the Center for Culinary Excellence — locations with the greatest potential to reduce waste.

The Waste Warriors initiated the education process for all staff members within the three operations. Their first task was to teach everyone how to use the new scales used for tracking, as well as to bolster trust in the system with the bigger goal in mind — reducing waste. 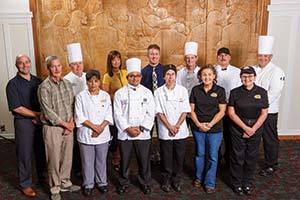 Waste Warriors is a team of individuals within Campus Dining

The dedication and commitment of this team, in coordination with the staff, generated a reduction in waste of almost 30 percent or roughly 36,000 pounds in four months (the equivalent of almost four elephants!). This success was accomplished by an overall increase in awareness, and more timely preparation of food and pantry items closer to service.

Moving forward, the warriors will continue their diligence in reducing waste during production and will be searching for more opportunities to reduce waste at campus food and beverage outlets.