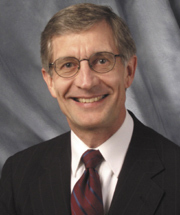 Thomas G. Burish, president of Washington and Lee University and a distinguished researcher in the field of clinical psychology, was elected provost of the University of Notre Dame today by its Board of Trustees, acting on the recommendation of Rev. John I. Jenkins, C.S.C., University president. Burish also wasappointed professor of psychology.p. Burish, 55, a Notre Dame alumnus, has been president of one of the nations top liberal arts colleges since July 2002. Prior to joining Washington and Lee in Lexington, Va., Burish was the longest-serving provost in the history of Vanderbilt University. He served as provost at the nationally renowned research university from 1993 to 2002.p. Known as a ground-breaking researcher, award-winning teacher and gifted leader, Burish exemplifies the excellence and humanity to which Notre Dame is dedicated. Through his work, Burish has helpedtens of thousands of cancer patients better cope with the emotional and physical pain of this disease,according to John R. Seffrin, chief executive officer of the American Cancer Society. Burish currently serves as chair of the American Cancer Societys national board of directors.p. As provost and second ranking officer of the University, he will exercise responsibility for all academic matters. He will be the fourth person to hold the office since it was established in 1970. He succeeds Nathan O. Hatch, who earlier this month became president of Wake Forest University.p. Father Jenkins and his search committee have done a marvelous job in finding such a distinguished scholar for this important role, and we take great pride in his being a Notre Dame alum as well,commented Patrick McCartan, chairman of the Board of Trustees.p. Notre Dame is extremely fortunate to have in Tom Burish an administrator of remarkable experience and accomplishment, a distinguished scholar, and a person who understands and is committed to the Universitys distinctive mission,Father Jenkins said.As I begin my presidency, I am truly excited to work with Tom to lead Notre Dame to be a Catholic institution that is recognized as one of the pre-eminent universities in the world.p. Father Jenkins noted that Burish is recognized as a university leader who can move an institution forward.He has a track record of promoting an interdisciplinary culture within institutions, and is a great champion of the academic core,he said.p. Burish said Notre Dames Catholic character and mission played a significant role in his decision to return to his alma mater.p. Father Jenkinsarticulation of Notre Dames plan to continue its quest to be both a great research university and a great Catholic university, a vision supported enthusiastically by the members of the search committee and by trustees with whom I spoke, was exhilarating and compelling,he said.p. Addressing the difficulty of leaving Washington and Lee, he noted that McCartan had remarked to him,Welcome back home.p. Burish added,Although I am fully aware that Notre Dame has changed and improved in significant ways since I graduated many years ago, Pat nonetheless captured exactly what I was feeling. It is wonderful to be home.p. A native of Peshtigo, Wisconsin, Burish was graduated from Notre Dame, summa cum laude, with a bachelor’s degree in psychology in 1972. He earned his master’s degree in psychology from the University of Kansas in 1975 and a doctorate in clinical psychology from Kansas a year later.p. While at Kansas, Burish received the David Shulman Memorial Award of Excellence in Clinical Psychology. He moved in 1976 to Vanderbilt, becoming a full professor in 1986. He won Vanderbilt’s prestigious Madison Sarratt Prize for Excellence in Undergraduate Teaching in 1980, and served as chair of the Department of Psychology from 1984 to 1986. Burish became Vanderbilt’s provost in 1993. He is the co-author or co-editor of four books, and has contributed to more than 16 other books and written more than 60 journal articles.p. In accord with Notre Dame’s Academic Articles, Father Jenkins chaired the search committee elected by the University’s Academic Council and consulted with the committee before presenting his recommendation to the Trustees.p. Burish and his wife, Pamela, have two sons, Mark, a 2002 graduate of Princeton University, and now an M.D./Ph.D. candidate at Vanderbilt, and Brent, who earned a bachelor’s degree in biological science from Notre Dame in 2004 and a master of business administration from Notre Dame’s Mendoza College of Business in May.