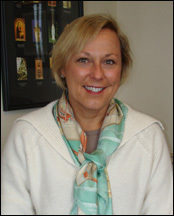 Hilary Crnkovich is stepping down as vice president for public affairs and communication at the University of Notre Dame, effective Aug. 1.

Since coming to the University in 2005, Hilary has been an enthusiastic and esteemed colleague whose energetic and innovative leadership has greatly strengthened our communication efforts at Notre Dame,said Rev. John I. Jenkins, C.S.C., the Universitys president.She has decided to leave her position and return to Chicago to be closer to her family.We will miss her presence, but we are deeply grateful for all she has done for Notre Dame.

Father Jenkins said he soon will initiate a national search for Crnkovichs successor.

It has been an honor and a privilege to serve Notre Dame in this capacity,Crnkovich said.I hope that the contributions our team has made these last three years have lasting impact on how people experience and interpret Notre Dame. Today, I believe we are creatively more vibrant, strategically aligned with our goals and have a solid communications foundation for the future. While we have more ahead of us, I do feel this is an opportune time to begin a transition to the next leader for the division who can carry on this momentum and build for an even stronger future.

During her tenure, Crnkovich took a leadership role on a wide array of major University events and initiatives, including the inauguration of Father Jenkins, the launch of the Spirit of Notre Dame capital campaign, the production of three Notre Dame Forums, a tribute last fall in Washington, D.C., to Notre Dame president emeritus Rev. Theodore M. Hesburgh, C.S.C., and the selection of a well-known photograph of Dr. Martin Luther King Jr. and Father Hesburgh to the Smithsonian Institutions National Portrait Gallery.

Crnkovich also directed the creation and production of the Universitys institutional messaging on television and the redesign of Notre Dames home page on the World Wide Web.

Hilary has made significant changes in how we cast ourselves as an institution,Father Jenkins said.Our television advertising has broken the clutter of institutional spots during football and other athletic events to convey compelling messages about the University, and our new Web site has advanced a far more robust experience for the more than 1 million people who view it.

Under Hilarys leadership, we have made great progress in communicating a consistent message across mediums and communications channels to tell our story uniformly and powerfully.

Prior to coming to the University, Crnkovich served as the managing director/brand practice from 2002 to 2005 in the Chicago office of Burson-Marsteller, specializing in marketing, strategic positioning, crisis management, lobbying, communications, Internet strategies and media relations. She previously worked for the firm from 1989 to 1993. From 1993 to 2002, Crnkovich was a partner in Chicago-based Designkitchen, an award-winning print and Web site design firm. Earlier in her career, she served as a senior account executive at The Earle Palmer Brown Companies of Bethesda, Md., and Philadelphia. Throughout her career, she has worked on a global basis with clients ranging from entrepreneurial start-ups to Fortune 500 conglomerates.

Crnkovich earned her bachelors degree in political science from the University of Michigan and pursued graduate studies in graphic design and fine arts at the Parsons School of Design in New York City.