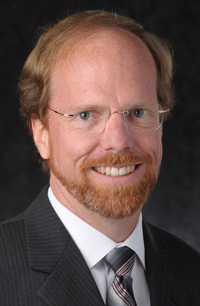 A professor of chemistry and biochemistry at Notre Dame since 1988, Jacobs has served in the Provost’s Office since 2004. His contributions have included enhancing the practice and evaluation of teaching, expanding participation in undergraduate research, advancing study abroad opportunities, supporting assessment of student learning, implementing the Academic Code of Honor, and reorganizing the University’s enrollment management efforts.

“Dennis’ contributions to Notre Dame have been numerous, broad and exemplary,” Notre Dame Provost Thomas G. Burish said. “As a teacher and researcher, administrator and mentor, team player and leader, Dennis has excelled. He has uncommon talent, wisdom, resolve and grace, wrapped in a person of great modesty and the highest ethical standards. We are most grateful for all he has done for Notre Dame, and wish him great success and fulfillment at Santa Clara.”

“It has been a delight to teach, learn from, and be inspired by Notre Dame students over the past twenty-three years,” Jacobs said. “The University of Notre Dame has given me the privilege of developing transformational learning experiences, pursuing scholarly inquiry within my chosen field, and working collaboratively to advance Catholic higher education. I am tremendously grateful for the many dedicated colleagues at Notre Dame who have taught me, through their example, how to live out one’s vocation each and every day.”

Jacobs’ laboratory research at Notre Dame involved the study of non-thermal processes at the gas/solid interface, for which he was awarded an Alfred P. Sloan Foundation research fellowship in 1993. In 2008, he launched a yearlong experiment on the International Space Station to record how polymeric materials (plastics) degrade as they are continuously attacked by energetic particles in low earth orbit. The research seeks to identify and inhibit the chemical pathways by which synthetic materials are eroded on the exterior of an orbiting spacecraft. These experiments are part of a national effort to develop inexpensive lightweight materials for use in next-generation satellites.

Outside the laboratory, Jacobs has been a national and campus leader in the scholarship of teaching and learning, work that has led to a Kaneb Teaching Award, Madden Award, Shilts/Leonard Teaching Award and Presidential Award from Notre Dame.

Jacobs was named a national Carnegie Scholar in 1999-2000, and two years later the Carnegie Foundation recognized him with its highest honor, the U.S. Professor of the Year Award for doctoral and research universities. The award honors dedication to teaching, commitment to students and creative approaches to education, and is the only national award to acknowledge teaching excellence.

Jacobs also was active in the local community. He created a course in which students collected dust, soil and water samples from local homes to identify and reduce the risk of lead poisoning in young children.
Jacobs earned his doctorate in chemistry from Stanford University after receiving two bachelor’s degrees, in chemistry and physics, from the University of California at Irvine. In 2007, UC Irvine recognized him with a Lauds & Laurels Award for distinguished alumni.

Beginning August 1, Jacobs will serve as the chief academic officer of Santa Clara University and provide leadership and management of all aspects of academic and student life programs. Santa Clara is a comprehensive Jesuit, Catholic university located in California’s Silicon Valley. It offers its more than 8,500 students rigorous undergraduate curricula in arts and sciences, business, and engineering, plus master’s, doctoral and law degrees. It is California’s oldest operating higher-education institution and has the fourth-highest graduation rate among all U.S. master’s universities.