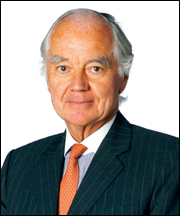 Sir John Bond, chairman of the Vodafone Group, will give a lecture onChina: A PerspectiveSept. 13 (Thursday) at 6:30 p.m. in the Jordan Auditorium of the University of Notre Dames Mendoza College of Business.

In addition to chairing Vodafone, the world’s largest mobile telecommunications company, Bond also serves as a non-executive director of Ford Motor Company.In May of 2006, he resigned as group chairman of HSBC Holdings, one of the largest banking and financial services organizations in the world, where he had worked since 1961. Under his direction, HSBC expanded its predominantly Asian operations and became a global bank with 10,000 offices in 78 countries around the world, including Latin America, Canada, the U.K. and the U.S.

Bond serves as chairman of the Hong Kong Chief Executive’s Council of International Advisors and is a former governor of the English-Speaking Union.The recipient of a knighthood in 1999, the Foreign Policy Associations 2003 Gold Medal and the Magnolia Gold Award from the Shanghai Municipal People’s Government, Bond also was recognized earlier this year for lifetime achievements at the European Business Awards.

The lecture, which is free and open to the public, is sponsored by Notre Dames Kellogg Institute for International Studies, Mendoza College of Business, and Center for Asian Studies.