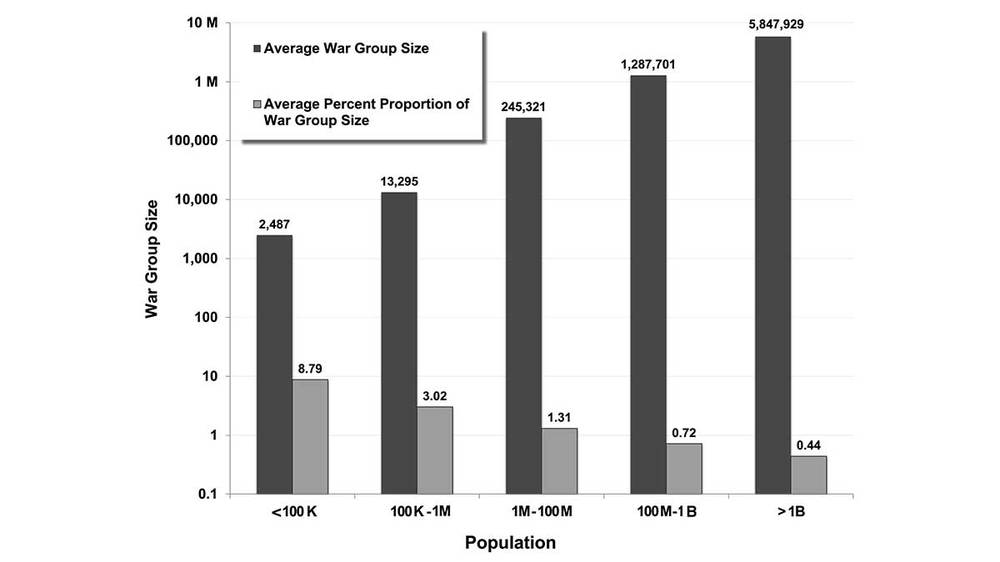 Anthropologists have debated for decades whether humans living in tribal communities thousands of years ago were more or less violent than societies today. Researchers at the University of Notre Dame wonder if the question of more or less violence is the wrong one — what if it’s a matter of scale?

In a new paper published in Proceedings of the National Academy of Sciences, Rahul Oka, Ford Family Assistant Professor of Anthropology; Mark Golitko, assistant professor of anthropology; Susan Sheridan, associate professor of anthropology; and Agustín Fuentes, the Rev. Edmund P. Joyce, C.S.C., Endowed Chair in Anthropology, along with co-authors Marc Kissel of Appalachian State University and Nam C. Kim of the University of Wisconsin-Madison, present data showing that the size of a society’s population is what drives the size of its “war group,” or number of people of fighting age who defend it. They also show that the size of the war group is what determines the number of casualties in a conflict.

Specifically, the researchers show that the larger the population of a society, the smaller its war group size, proportionally — which means fewer casualties in a conflict.

Instead, the researchers found that societies today are not necessarily more or less violent than past societies. The proportions are driven by a deep scaling law guiding social organization, Oka said.“Small-scale societies have a high proportion of their people involved in war,” Oka said. “Fatalities might actually be 40 to 50 percent of the group, and definitely a higher proportion of those fighting get killed. But as we go from small-scale societies to big states and conflicts between empires or nations, fatalities rarely go above 1 percent of the group populations. So if you have 100 people fighting, you might actually get 50 people dying, combatant and non-combatant. That’s 50 percent. But if you have 3 million people fighting you might get 100,000 dying, which is actually much less, proportionally, than the small-scale society. This is seen by many to suggest that contemporary large societies are less violent than past small scale societies, promoting the idea that before the state, life was nasty, brutish and short.”

The researchers looked at scaling, not percentages or proportions, as a reflection of the realities of warfare. As population size goes up and societies form into states, Oka said, the military becomes proportionally smaller, more nimble and more specialized. A small-scale society can have 40 percent of its population committed to fighting, for example, but “it’s just economically impossible for a state-level society with, let’s say, 10 million people to have an army that is 4 million strong,” Oka said. “It’s logistically inconceivable.”

The idea of using war group size and conflict casualties as proportions of the overall group population to determine if some societies are more violent than others isn’t a new one to anthropologists, Oka said.

However, this study is the first of its kind to offer an expanded data set looking at societies in different places and time periods, during both peacetime and conflict, and examining the scaling relationship between population and number of people in the army or war group, and between the number of people in conflicts and deaths occurring during conflicts.

“These scaling laws provide a means of comparing conflicts across all population scales and social and economic organizations,” said Golitko. “Notably, it appears that the relative level of investment and size of conflicts have not changed much once increases in population over time are accounted for. In other words, we may be no more or less violent now than in the past.”

“These are deep scaling laws that are describing the size of war groups and in turn the number of people killed in conflicts,” Oka said. “Neither variable is affected by type of society or institutions. Both scale, directly and indirectly, with population. These are deeper organizational processes that have to be addressed as we continue trying to reduce conflict investment and build peace.”