Let’s get something straight right off the bat. I don’t like John Boehner. I love him. Father Jenkins, Notre Dame, thank you. Thank you for this honor — the Laetare Medal. I can say, without fear of contradiction, it is the most meaningful award I’ve ever received in my life. And my mother Catherine Eugenia Finnegan, I wish she were here, but she’s looking down to see me receive this. 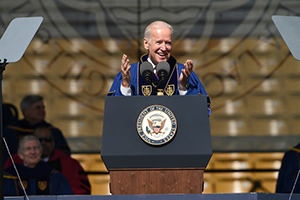 But I must say, Father Jenkins, my grandfather, Ambrose Finnegan, who played for Santa Clara at the turn of the century and was a newspaperman at Scranton, always resented Notre Dame. Because Santa Clara had a football team, particularly in the teens and ’20s and ’30s, referred to as the Notre Dame of the west. He said, “Hell, they’re the Santa Clara of the Midwest.” Grandpop, forgive me. I played football at the University of Delaware and in high school, and I finally made it to the 50-yard line in Notre Dame Stadium, man. This is worth the trip, man. You all think I’m kidding. I’m not.

Father, you said that politics is a full-contact sport. I agree. But Father, to the detriment of the nation in my view, and I think John would agree with me, it has recently become a blood sport full of invective and ad hominem arguments. I’ve been there a long time. John and I served together for over 25 years. I’ve been elected to the Senate seven times and vice president twice. I’ve not seen it like this in my career. You quoted the Holy Father, Father, when you said he addressed the joint session of Congress, he said, our responsibility was to the tireless demanding pursuit of the common good, the chief aim of politics.

Father, I’ve had the privilege of spending time, as John did, with the Holy Father. He not only consoled me and my family when I lost my Beau, but when I met him representing the United States at his inauguration, and I walked up with other heads of state to be formally introduced to him in the Basilica, a monsignor who I had just spent time with earlier because I had been meeting with Pope Benedict — I hope I wasn’t the reason he resigned — turned to introduce me to the Holy Father. And before he could, the Holy Father put out his hand and said, “Mr. Vice President, you are always welcome here. You are always welcome here.” Think about him. That’s the message he has sent to the world. It’s the reason why he is the most respected man in the world as I speak here today. Not just among Catholics, but Muslims, Hindus, other Christians, the Jewish community. That’s not hyperbole, he literally is the most respected man in the world. You are always welcome here. And I believe the message he was urging the Congress was to extend to everyone, we who hold high public office, to extend our hand as Americans and say, “You are always welcome here.”

I was raised by parents who are the embodiment of Catholic social doctrine. I was taught by the Sisters of Saint Joseph and the Norbertine priests in high school, “everyone is always welcome in my home.” I was taught by my mother that no one was better than me but that everyone was my equal.

I was taught by my father — who struggled — that every man, every woman, he meant everyone regardless of their station of life, regardless of whether or not you agreed with them, was entitled to be treated with dignity and respect. My father used to say that the greatest sin of all was the abuse of power whether economic, political, psychological or physical. He’s the reason that I wrote the Violence Against Women legislation. He abhorred the notion of the abuse of power, totally consistent with what his Holiness talks about now and what our Roman Catholic faith has taught us for over 2,000 years.

But most importantly, my family and our faith warned me against the temptation of rationalizing in the pursuit of ambition. “I know it’s her birthday, but she won’t mind, this is an important business trip.” “I know it’s his last game, but I’d have to take the red-eye back to see it, he’ll understand.” “I know we’ve been planning this family vacation for a long, long time, but I have such an opportunity if I leave.” It’s not only wrong, but if you engage in this rationalization, which everyone does, never underestimate the ability of the human mind to rationalize.

But If you do, it will become very difficult to weather the storm when reality intrudes. And it will. Reality will intrude. In 1972 I was elected the second youngest man in the history of the United States of America. I was 29 years old; I wasn’t old enough to be sworn in. I had to wait 13 days to be eligible. Forty-one days later, reality intruded. I was in Washington hiring my staff when I got a phone call. A tractor-trailer had broadsided my wife and my three children. Killed my wife and killed my daughter. And for my two boys — it was uncertain — who, thank God, later fully recovered. Being elected at 29 to the Senate is pretty heady stuff. It’s the stuff of which ambition can get out of hand. Reality intruded. Forty-two years later, it happened again. Many of your parents and people in the audience have gone through worse than I have. They know. Many of you know.

My soul, my son, my Beau, the attorney general in the state of Delaware, the most respected political figure in the state, having volunteered as a U.S. attorney to go to Kosovo to help them set up a criminal justice system during the war. And John, I just learned that the president of Kosovo is naming a street after my son, the Major Joseph R. Biden Boulevard. He then volunteered as attorney general — he had to get an exception, because you become federal property when you’re in the National Guard — to go to Iraq for a year.

A year later, he came home a decorated soldier, awarded the Bronze Star, the Legion of Merit, the Delaware Conspicuous Service Cross, the best physical shape of his life. While running 10 miles, had to lay down. He was diagnosed with stage 4 glioblastoma in the brain. Two years later it took him, after a heroic struggle.

John talked about, my father talked about, you just gotta get up. My son’s last words to me were, “Dad, I’m not afraid. Promise me you’ll be all right.” My dad had an expression. He’d say: “Never complain and never explain.” Beau never, ever did. And I think back on it. What would happen if John and I only followed our ambition? Thank God I never missed Neilia’s birthday, or an important thing. Thank God I never missed his game for an unimportant political event. I think Beau said it best, and I say it to all of you, when he was attorney general during a commencement speech he was giving — he went to Penn and he went to Syracuse Law School in 2011. Here’s what he said. He said, “You’ll find peace when there are certain rules that are not malleable. Your conscience, your conscience should not be malleable. Your values for another. These are the means along with the learning you now possess. They are the things that will guide you. They’ll also be the things to save you.”

Father, I’ve read some accounts how John and I are “old school.” We used to treat each other with respect, hang out with each other. John and I aren’t old school, we’re the American school. We’re what you have to restore. Where progress only comes when you deal with your opponent with respect, listening as well as talking.

Class of 2016, this is not hyperbole, you’re the best educated, most tolerant generation in the history of the United States of America. So engage. Engage in the tireless pursuit of finding common ground because not only will you be happier, you will be incredibly more successful. That’s where you’ll find your reward and it’ll make us all better for it. It’s a true honor to be here with John. It’s a great honor to receive this medal. May God bless you all. And may God protect our troops.