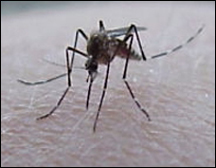 Mosquitoes found on the University of Notre Dame campus have tested positive for West Nile virus. Also, an Asian mosquito which may be a particularly effective carrier of the virus has been found at the University, the first time this particular species has been identified in St. Joseph County.p. Researchers from the Universitys Center for Tropical Disease Research and Training have been collecting mosquitoes on campus since early May. The researchers have identified mosquitoes recently collected from a wooded area near the Fatima Retreat Center on campus as Culex pipiens, believed to be the primary carrier of the virus in this area. Some of these tested positive for West Nile.p. The discovery of Ochlerotatus japonicus, the Asian Bush mosquito, on campus follows an announcement by Indiana Health Department officials last month that mosquitoes collected in Clark and Harrison counties in southern Indiana were identified as Asian Bush mosquitoes, the first time the species, common to Japan, had been found in Indiana. Its presence here indicates it has now spread throughout the state. The mosquito has now been documented in six states since it was first seen in the U.S. in 1998.p. According to state health officials, there are now six mosquito species in Indiana capable of carrying the West Nile virus.p. West Nile virus can cause encephalitis (inflammation of the brain) or meningitis (inflammation of the lining of the brain and spinal cord). It is spread to humans by the bite of an infected mosquito, which itself becomes infected by biting a bird that carries the virus. The virus cannot be transmitted from one human to another.p. Only a small percentage of people bitten by a virus-infected mosquito will develop symptoms of West Nile. Most people who are infected have no symptoms or may experience mild illness such as fever, headache and body aches before fully recovering.p. Severe West Nile symptoms are most likely to develop in people over age 50, in patients with chronic diseases such as diabetes, and in people whose immune systems have been weakened by AIDS or chemotherapy. At its most serious, the virus can cause permanent neurological damage and can be fatal.p. Although the Asian bush mosquito is believed to be more effective at transmitting West Nile virus than Culex mosquitoes, several precautions can help protect against both species. These precautions include:p.  Removing containers that collect standing water, such as cans, bottles, buckets, toys and old tires. Also, removing standing water from any container in which water accumulates and where mosquitoes can breed.  Checking and repairing window and door screens.p.  Keeping gutters and drainage areas clean.p.  Curbing activities at dawn, dusk and during the evening when mosquitoes are more likely to be biting.p.  Wearing clothing that covers the skin, such as long sleeve shirts, pants and socks, when outdoors.p. Applying an appropriate insect repellent, such as those containing the chemical DEET.p. Contact: Catherine Young, Center for Tropical Disease Research and Training, 571-631-3241, cyoung@nd.edu . p.