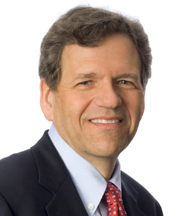 O’Donnell is a biomedical engineer who is renowned for his interdisciplinary focus. He earned his bachelor’s degree in physics in 1972 from Notre Dame and his doctoral degree in the same field from the University in 1976.

The Distinguished Alumnus Award was established in 2006 to mark the Graduate School’s first distinct commencement ceremony and is presented to an individual who has received a graduate degree from Notre Dame and made a difference to his or her field, community or society at large.

After leaving Notre Dame, O’Donnell began his career as a postdoctoral fellow and senior research associate in physics and medicine at Washington University in St. Louis. He went on to a research fellowship in electrical engineering at Yale University and then to a decade of private-sector experience as a research and development physicist at the General Electric Company in New York.

In 1990, O’Donnell joined the faculty of the University of Michigan as a professor of electrical engineering and computer science. He later chaired that university’s biomedical engineering department from 1998 to 2006, proving himself not only a capable administrator but an excellent teacher, winning two teaching awards.

In 2006, O’Donnell became dean of engineering at the University of Washington, which prides itself on its interdisciplinary focus. In addition to a heavy load of administrative duties, he continues his own research program.

An expert in ultrasound imaging, his research uses high-frequency energy pulses to perform non-invasive medical imaging. His specific research interests include ultrafast optics, in-vivo microscopy, catheter imaging of coronary arteries, optoacoustic arrays and elasticity and molecular imaging.O’Donnell is currently the principal investigator on four National Institutes of Health grants dealing with applications of ultrasound imaging and the co-principal investigator on five more. He has graduated 25 doctoral students and mentored 15 postdoctoral fellows. He holds 55 patents and has authored or co-authored more than 300 publications.

In addition, he is associate editor of the journal Ultrasonic Imaging, a fellow of both the technology professional organization IEEE and the American Institute for Medical and Biological Engineering, and a member of the American Physical Society. This past February, he was elected to the National Academy of Engineering, one of the highest professional honors accorded an engineer.

The previous winners of the Distinguished Alumnus Award are sociologist Saskia Sassen and writer Michael Collins.