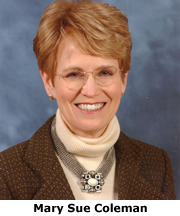 Mary Sue Coleman, a distinguished biochemist who has served as president of theUniversityofMichigansince 2002, will be the principal speaker May 19 (Saturday) at the first Commencement ceremony for the University of Notre Dame Graduate School. She will receive an honorary degree the next day at Notre Dames 162 nd Commencement exercises.

TheGraduateSchoolceremony will take place at 1 p.m. in the Leighton Concert Hall of theDeBartoloCenterfor the Performing Arts. A reception for graduates and their guests will immediately follow the ceremony.

Coleman was a member of the biochemistry faculty at theUniversityofKentuckyfor 19 years, specializing in the study of the immune system and malignancies. She authored numerous articles on her findings and directed funded research projects supported by a wide array of federal agencies. She was elected to theInstituteofMedicineand also is a fellow of the American Association for the Advancement of Science and theAmericanAcademyof Arts and Sciences.

As U-Ms 13 th president, Coleman has advanced initiatives related to student residentiallife, interdisciplinary studies, ethics in society and health care. She also is one of the nations leading voices on the educational value of affirmative action. Under her leadership, U-M has launched a $2.5 billion capital campaign.

This year marks the first time Notre Dame will provide a distinct ceremony forGraduateSchoolstudents who have earned masters and doctoral degrees. The event will include recognition of all graduates and presentation of the Shaheen Awards, the Graduate School’s highest student distinction; the Rev. James A. Burns, C.S.C., Graduate School Award, presented to a faculty member for outstanding contributions to graduate education; and the Distinguished Graduate Alumni Award. Such recognition was not possible at the University-wide ceremony, due to time constraints.

A separate ceremony is the norm at many of our peer institutions,Rev. John I. Jenkins, C.S.C., president of the University, wrote in a letter toGraduateSchoolstudents.I wanted to create an event that would focus attention on our graduate studentsaccomplishments and degrees . because they deserve this special attention.

TheNotre DameLawSchooland the MBA Program in the Mendoza College of Business have offered separate ceremonies for their advanced degree recipients for many years.