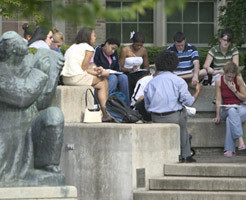 The amount of scholarship aid awarded to undergraduate students by the University of Notre Dame for the current academic year is nearly 10 percent more than what was distributed the previous year and has more than doubled over the last five years, according to an annual report prepared by the Universitys Office of Student Financial Services.p. University-administered scholarships – which, unlike loans, are funds that are provided free and clear to students from Notre Dames financial aid endowment – amount to approximately $59.4 million this year, some $5.7 million more than what was awarded to undergraduates in 2003-04. University scholarships for undergraduates have increased by more than 150 percent in the last six years while tuition has grown by 39 percent over the same period.p. This years undergraduate total is 53 percent more than the amount of aid provided in 1999-2000, and 10 times more than the $5.4 million distributed 15 years ago when scholarship enhancement was targeted by Notre Dames officers and trustees as their top priority.p. Forty-five percent of the current freshman class receives University scholarships amounting to a total of $15.9 million, representing almost $2 million above the amount awarded to the previous freshman class.p. Notre Dame is providing $36 million in scholarship support to graduate students, a $2.4 million increase from the previous year, bringing the total for University-awarded scholarship aid for undergraduate and graduate students to $95.5 million, an $8 million increase over 2003-04.p. Notre Dames financial aid endowment includes more than 1,000 individual endowed scholarships underwritten by benefactors. Another large source of revenue for the financial aid resources is the Universitys exclusive contract with NBC television to broadcast home football games.p. Notre Dame now is able to meet the full demonstrated financial need of all admitted students. A financial aidpackage,including student loan assistance and part-time campus employment, is typically combined with scholarship and grant assistance to make the costs affordable for all families. Any additional outside scholarships, which many Notre Dame students bring with them, typically first serve to reduce a students need to borrow.p. As with all Notre Dame scholarship programs, annually demonstrated financial need is an essential consideration along with studentscredentials, according to Joseph A. Russo, director of student financial services.p. Other highlights from the 2004-2005 preliminary financial aid report:p. * Total financial aid for this academic year – including loans, jobs and internal and external grants and scholarships – is $227.4 million. Of the total, $147 million is going to undergraduates and $80 million is for graduate students.p. * Loans to students and their parents account for $49 million of the $54.7 million from federal assistance programs. The remaining $5.7 million comes in the form of grants and work-study programs, which include University matching funds.p. * Non-federal financial aid – including University-based scholarships as well as those earned from outside the University, alternative loans, grants-in-aid, tuition remission, and University student employment – rose $8 million to $166 million.p. * ROTC scholarship funds rose by an average of $2,400 per student, though the number of recipients decreased.p. * The number of students receiving federal Pell Grants has increased by 150 in five years.p. The report provides a preliminary summary of all student aid from University, government and private sources for the 2004-05 academic year. The totals are expected to increase slightly when a final report is issued at the end of the fiscal year.p. Contact: Joseph A. Russo, 574-631-6436