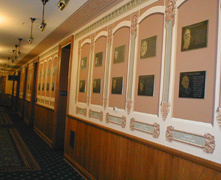 The University of Notre Dame will add the names of three distinguished figures to its Wall of Honor, a display in the Main Building that recognizes “exceptional men and women whose contributions to Notre Dame are lasting, pervasive and profound.”p. The new honorees are the late Joseph Casasanta, director of the Notre Dame Band from 1923 to 1942; the late Helen H. Hosinski, long-serving secretary to Rev. Theodore M. Hesburgh, Notre Dame’s president emeritus; and Curry Montague, principal custodian of the Main Building from 1970 to 2000.p. The three were selected for the Wall of Honor by the University’s officers. Hosinski and Montague will be honored Aug. 11 at a ceremony to observe the hanging of their commemorative plaques, and Casasanta will be honored similarly this fall.p. Casasanta, who also chaired Notre Dame’s Department of Music and directed its Glee Club, composed numerous songs during his tenure as band director, including the University’s alma mater, “Notre Dame, Our Mother,” which was written for football legend Knute Rockne’s funeral in 1932. Casasanta died in 1968.p. The indispensable assistant to Father Hesburgh throughout his legendary tenure as Notre Dame’s 15th president, Hosinski worked at the University from 1943 until her retirement in 1990. She passed away in 2000.p. Serving until his retirement after 30 years of service, Montague, through his work in the Main Building, provided the Notre Dame community and its guests a congenial, memorable and inspiring example of how hard work, devoted service and charity transform duty into joy.p. The University dedicated the Wall of Honor in 1999. Located on the ground level of the Main Building, it also commemorates such notable Notre Dame figures as founding father Rev. Edward F. Sorin, C.S.C.; Father Hesburgh; Rev. Edmund P. Joyce., Notre Dame’s vice president emeritus; the late George Craig, internationally known for his ground-breaking research on mosquitoes; and Rockne.p.