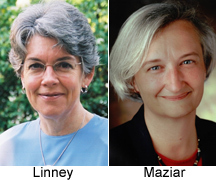 Christine Maziar, provost at the University of Minnesota, and Jean Ann Linney, chair of the Department of Psychology at the University of South Carolina, have been appointed vice presidents and associate provosts at the University of Notre Dame. Both will begin in their new positions Aug. 1.p. Maziar will replace John Affleck-Graves, who recently was elected executive vice president of Notre Dame. Her responsibilities will include administration of budgets, academic space management, and the implementation of the University’s academic strategic plan.p. Linney will fill the position vacated by Carol Ann Mooney, the new president of Saint Mary’s College. She will have broad responsibility for the University’s relationship with its faculty, including promotion and tenure, faculty governance, and affirmative action initiatives.p. “I am delighted that Chris and Jean Ann have accepted our offers to join the community of scholars and the leadership group at Notre Dame,” said Nathan O. Hatch, the University’s provost. “Both are highly regarded in their chosen fields and are equally respected as administrative leaders. Each has a keen sense of Notre Dame’s mission, and I am confident the University will benefit greatly from their wisdom and experience in the years ahead.”p. Maziar served as Minnesota’s chief academic officer from July 2002 until stepping down in late May to accept the appointment at Notre Dame. As provost, she was directly responsible for all colleges and academic units on the Twin Cities campus, except those in the Academic Health Center. She also oversaw the University Libraries, and the Offices of Information Technologies, Admissions, Student Affairs, and Enrolled Student Services.p. Prior to her appointment as provost, Maziar served for four years as vice president for research and dean of the Graduate School at Minnesota with responsibility for an externally funded research program of approximately $500 million and 150 graduate programs serving more than 7,000 students. From 2000-02 she served as chair of the graduate deans of the Big Ten Universities, and she chaired the Rhodes Scholarship Selection Committee for Minnesota from 1998-2001.p. Maziar joined the engineering faculty at the University of Texas in 1987 after earning her bachelor’s, master’s and doctoral degrees in electrical engineering from Purdue University. At Texas, she developed a reputation as an innovator in the classroom, including the creation of an interdisciplinary course titled “On the Edge of the Electronic Frontier: The Technology, Culture and Politics of the Internet.” She served for three years at Texas as vice provost.p. Maziar received a Presidential Young Investigator Award from the National Science Foundation and was honored by Purdue in 2000 with its Outstanding Electrical Engineer Award. Her many research interests include developing models and computer simulation tools that describe charge transport in semiconductor device structures, transport phenomena in ultra-small structures, structures under high electric fields, and structures composed of superlattices or novel materials.p. Maziar has served on the Advisory Council for Graduate Studies and Research at Notre Dame since 2002.p. Linney has led the psychology department at South Carolina for seven years, and last year was appointed the Louise Fry Scudder Professor of Psychology. From 1995-97 she served as associate dean for Graduate Studies and Faculty Development in the College of Liberal Arts. She joined the South Carolina faculty in 1983 after previously teaching and conducting research for six years at the University of Virginia and for a year at Miami University (Ohio).p. Linney’s research focus is in the area of community psychology, prevention science, and promotion of mental health and competence. She has conducted research and published work on preventive interventions with children and adolescents, environmental assessment, race relations, and cultural and ethnic diversity. Her current research activity includes empowerment and preventive interventions for adolescent and pre-adolescent girls, evaluation of after-school programs for at-risk children, preventive interventions to promote home-school connection and enhanced school readiness in Head Start, and the effects of community and school environments on school readiness and achievement.p. Much of Linney’s work has included school- and community-based prevention and intervention programs. In collaboration with the Columbia (S.C.) Urban League, she initiated Kids College, a prevention program addressing race relations and multicultural issues. Other work has focused on the preventive implications of social policy change, including school desegregation and policies affecting juvenile offenders.p. Linney earned her bachelor’s degree from Hobart and William Smith College and her master’s and doctoral degrees in psychology from the University of Illinois. She has been a member of the national leadership honorary society Omicron Delta Kappa since 1998, is a past president of the Society for Community Research and Action, and is a fellow of the American Psychological Society and the American Psychological Association. She has received numerous honors, including the Roland B. Haynes Award from the Black Psychology Graduate Student Association, the Excellence Award from the South Carolina Public-Academic Mental Health Consortium, and the Mary Modjeska Simpkins Award for Cultural Diversity for the creation of Kids College from The Children’s Trust Fund of South Carolina.p. Linney’s son Ryan was graduated from Notre Dame last year.p. Hatch plans to appoint another vice president and associate provost this summer to replace Rev. John I. Jenkins, C.S.C., who was elected president-elect by the Board of Trustees in April and will succeed Rev. Edward A. Malloy, C.S.C., as president July 1, 2005.p.