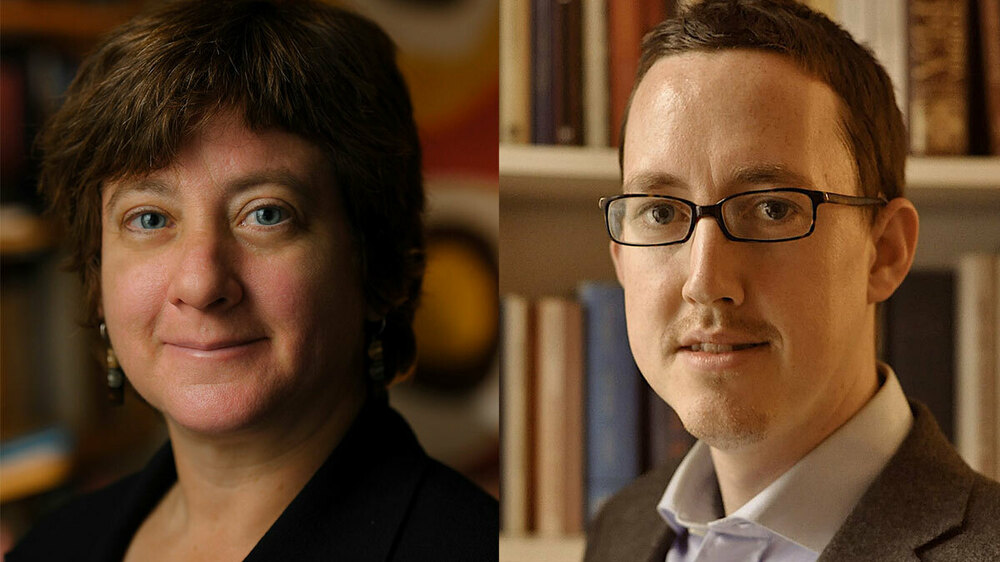 Two faculty members in the University of Notre Dame’s College of Arts and Letters have been awarded memberships at the Institute for Advanced Study (IAS) in Princeton, New Jersey, one of the world’s foremost centers for intellectual inquiry into the sciences and the humanities.

Karen Graubart, an associate professor of history, and Gabriel Radle, the Rev. John A. O'Brien, C.S.C., Assistant Professor of Theology, are two of the 271 new and returning scholars of history, cosmology, mathematics and countless other disciplines, with whom they’ll share seminars, meals and conversations this year.

Founded in 1930 by a cohort that included Albert Einstein, the IAS encourages its fellows to explore their subjects of expertise without concern for immediate application — but with the hope that their time at the center nurtures big, creative ideas.

“IAS is an institution whose sole purpose is sponsoring the progress of human knowledge, in a particular niche, in various disciplines,” Radle said. “It’s an honor to receive this fellowship, and quite humbling.”

Graubart has spent more than two decades investigating the lives of Indigenous women and other non-dominant subjects in the Iberian Empire. In her forthcoming book “Republics of Difference: Racial and Religious Self-Governance in the Iberian Atlantic” — which was supported in part by a National Endowment for the Humanities fellowship — Graubart charts the rise of Indigenous self-governance that flourished despite the oppressive conditions of Spanish rule.

At IAS, Graubart will begin a new project about collectivity and collective action among free Indigenous and Black people in colonial Panama. The eventual book will “explore Black self-governance, on a parallel with the way that we understand Indigenous self-governance” in the same period, she said.

“I started my career as a historian of Indigenous women — but I’ve increasingly come to believe that you can’t study Indigenous people and people of African descent separately,” said Graubart, who is also an affiliated faculty member with the Department of Africana Studies, concurrent faculty in the Gender Studies Program and Department of Romance Languages and Literatures, and a fellow of the Medieval Institute and Kellogg Institute for International Studies.

Using an epic 16th-century court case as a lens, Graubart is studying the commitments and identities of free Black people living under the Spanish crown. Conflict sparked in 1574, when the king of Spain ordered that all free people of African descent begin to pay tribute to the European regent. A group of free Black men and women in Panama launched a formal lawsuit arguing against the tax — and, unusually, the royal court decided to hear the case.

The litigation that followed produced a trove of rare early colonial sources, where free Black people in Panama brought forth witnesses and successfully defended their usefulness to the Spanish crown (and by extension, their right to not pay taxes).

In taking a close look at these documents, preserved in the Archive of the Indies in Seville, Graubart hopes to learn more about the way that various groups of free Indigenous and Black people — including roving cimarrones (runaway slaves), or the hundreds of free people of color that served as the Spanish militia — related to each other, alternately distinguishing themselves from one another and working together.

“What do these documents say about the formation of a collective consciousness among Black people in Panama, in this time period?” Graubart said. “How were free people of color thinking about themselves as citizens?”

The project takes on added weight, she notes, because “it's important to tell stories about Black history that aren’t just about slavery.”

“And I’m really interested in thinking about how free people of color lived in the world, and how they organized themselves,” Graubart said.

Marking adulthood in the Byzantine world

Radle is fascinated by the way that Christian liturgical rites have evolved — and sometimes remained the same — over millennia.

A Medieval Institute faculty fellow and a faculty affiliate of the Center for Italian Studies and Sacred Music at Notre Dame, Radle’s research focuses on the medieval Christian liturgies of the eastern Mediterranean world. His first book examines how individuals got married in the early Byzantine world, using medieval Greek manuscripts of liturgy as his guide. These marriage rituals, though old and culturally distinct, bore some resemblance to the marriages of today.

But as he worked, Radle noticed that medieval scribes had also painstakingly recorded rites with no easy modern corollary — one for marking a child’s first steps, for instance, or one for a young girl adopting the dress habits of an adult woman. In his upcoming second book, which Radle will develop at IAS, he turns his attention to this cluster of medieval rites that marked an individual’s leap from childhood into adulthood.

“These were liturgical rites that were officiated by the clergy, and were really important social rites of passage within individuals’ lives and the lives of families,” said Radle, who was recently appointed by Pope Francis as a consultor for the Congregation for the Eastern Churches.

Rites encoded in these medieval texts can illuminate how people grew up, socially and religiously, in the medieval Byzantine world.

Hair — cutting it, styling it and even hiding it from view — played a key part in this ritual negotiation from one life stage to another. Medieval Christians celebrated rites for giving a child their first haircut or shaving a young man’s beard for the first time.

In one chapter, Radle will build on a recent article about rites for the binding and veiling of a young girl’s hair for the first time, a custom that indicated a transition to womanhood, as well as maturity and morality. The issue of veiling one’s hair was a source of heated debate in late antiquity, as “loose hair was associated with loose morals,” Radle said. (St. Paul once wrote a stern letter to the Corinthians on the subject.)

While at IAS, Radle will consider the unique ways that Byzantine girls, boys, men and women defined themselves through the liturgy. He’ll also be on the lookout for similarities between then and now.

“What are the constants?” he said. “What are the human anxieties and difficulties that people across time have been facing?”

Originally published by Nora McGreevy at al.nd.edu on Oct. 7.