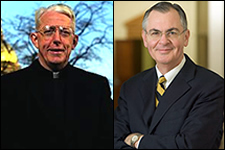 The Board of Trustees of the University of Notre Dame concluded its spring meeting Friday (April 29) by announcing the conferral of honorary doctoral degrees on the Universitys president, Rev. Edward A. Malloy, C.S.C., and provost, Nathan O. Hatch.

The announcement was a surprise to the two men, both of whom will be leaving their positions this summer. Father Malloy is retiring from the position he has held for 18 years, and Hatch, the Universitys chief academic officer since 1996, has been appointed president ofWakeForestUniversity.

Monk and Nathan have served Notre Dame with honor and distinction, and the board is pleased to offer these honorary degrees to them as a way of expressing our enduring gratitude and respect,board chair Patrick McCartan said.

Father Malloy and Hatch will be among 16 people, including principal speaker Vartan Gregorian, to receive honorary degrees at the Universitys 160 th Commencement exercises May 15.

In his 18 th year as Notre Dames president, Father Malloy will step down at the end of his current term, June 30. Under his direction, the University has experienced rapid growth in its reputation due to substantive improvements in the size and scholarly credentials of its faculty, the academic quality and diversity of the student body, and its financial resources and physical infrastructure.

Father Malloy is a professor of theology and, throughout his presidency, has continued to teach. Ordained to the priesthood in 1970, he holds three degrees from Notre Dame and a doctorate in Christian ethics fromVanderbiltUniversity. He is the recipient of 16 previous honorary degrees and will receive five more this spring from the UniversityofPortland,WesternOntarioUniversity,StonehillCollege,MarywoodCollegeandAncillaCollege.

Father Malloys academic concentration on the interplay of personal morality with public policy and professional ethics informs his own active public life. He is a leading advocate of volunteerism and has served on numerous boards dedicated to community service, including Campus Compact, Boys&Girls Clubs of America and the Points of Light Foundation.

Father Malloy also has worked to combat substance abuse through service to the National Advisory Council on Alcohol Abuse and Alcoholism, theNationalCenteron Addiction and Substance Abuse and other organizations.

After stepping down as president, Father Malloy, who will turn 64 in May, plans to take a sabbatical, followed by a renewed commitment to teaching, writing, pastoral ministry and service on boards of various not-for-profit organizations.

Rev. John I. Jenkins, C.S.C., has been elected to succeed Father Malloy on July 1.

Hatch, the Andrew V. Tackes Professor of History, was appointed provost in 1996. As the Universitys second-ranking officer, he has exercised overall direction of the academic enterprise.

During his tenure, Hatch focused on three areas: the pursuit of outstanding faculty; the revitalization of undergraduate education, including the creation of the Kaneb Center for Teaching and Learning and new opportunities in off-campus and international studies; and the enhancement of academic centers of excellence, including the Keough Institute for Irish Studies, the Institute for Latino Studies, the Keck Center for Transgene Research, and the Center for Nanoscience and Technology.

Hatch made several major academic appointments, including the deans of all four colleges, theLawSchooland theSchoolofArchitecture, the director of libraries, and the assistant provost for enrollment. In addition, he has played an integral role in enhancing Catholic intellectual life at Notre Dame through the establishment of the Erasmus Institute, a major center for scholarship informed by Catholic thought.

A member of the Notre Dame faculty since 1975, Hatch was vice president for graduate studies and research for seven years prior to his election as provost. He is considered one of the worlds most influential scholars in the study of the history of religion in America, and his book,The Democratization of American Christianity,was chosen in a survey of 2,000 historians and sociologists as one of the two most important books in the field.

A committee chaired by Father Jenkins is searching for a successor to Hatch.