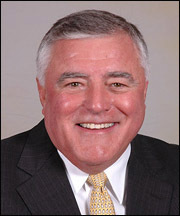 Robert F. Biolchini, a member of the University of Notre Dame Board of Trustees and partner in the Tulsa, Okla., law firm Stuart, Biolchini&Turner, and his wife, Frances, have made a $15 million gift to the University to help underwrite the renovation of the current Notre Dame Law School building.

This magnanimous benefaction will play an integral role in our concerted and strategic plan to enhance in every way the legal education that is distinctive to Notre Dame,said Rev. John I. Jenkins, C.S.C., University president.Bob and Fran have contributed their valued time, counsel and resources for more than 25 years, and we are tremendously grateful for this latest, and most extraordinarily generous, gift.

After a comprehensive renovation of the existing law school building, which will be renamed Biolchini Hall, it will house an expanded Kresge Law Library. The renovation in Biolchini Hall also will include two 50-seat classrooms, new space for Notre Dame Law Review, and new offices and work space for admissions and career services. The exterior of the building, including masonry, windows and roofing, will be restored where necessary.

A covered archway will link Biolchini Hall to the adjacent Eck Hall of Law, a three-story, 85,000-square-foot building that is under construction on the site of the former campus post office. Eck Hall will be composed primarily of a new moot courtroom, classrooms and faculty offices. When it is completed in January 2009, law school operations will be moved out of the existing building and renovation work will begin.

The combination of Biolchini and Eck Halls will give Notre Dame one of the outstanding law school facilities in the country,said Patricia A. OHara, Joseph A. Matson Dean of Notre Dame Law School.On behalf of all law school faculty, students and alumni, I want to offer my deepest thanks to Bob, Fran and their family.

Founded in 1869, Notre Dame Law School is the nations oldest Catholic law school and one of Americas oldest university law schools in continuous operation. It enrolls approximately 550 students and consistently ranks in the top tier of national surveys.

A 1962 Notre Dame graduate, Biolchini has served on the Notre Dame Board of Trustees since 2001. He was a member of the Law School Advisory Council for the previous 19 years, and he and Frances endowed the Universitys Biolchini Family Chair in Law in 1995. Their combined gifts to Notre Dame now exceed $18 million.

Biolchini earned his law degree from George Washington University and is a member of the Oklahoma and Michigan bar associations and has served since 1981 as a temporary appeals judge for the Oklahoma Supreme Court.

Biolchini serves as president and chief executive officer of PennWell Corp., a privately owned Tulsa-based media company founded in 1910 that publishes 75 international weekly and monthly business-to-business magazines and conducts more than 60 business-to-business conferences and exhibitions on six continents. He is chief executive officer of Bancshares of Jackson Hole (Wyo.), Valley National Bank, Lake Bancshares, Ameritrust, and is a director of American Business Media. He also has served and is serving on several private and public corporations in the oil and gas and electronics industries, and he is a member of Lloyds of London.

Frances Biolchini, a graduate of Trinity College, is active in several Tulsa community organizations, including the Girl Scouts, the Gilcrease Museum, Catholic Charities and other civic and charitable projects.

The Biolchinis are the parents of six children, five of whom are Notre Dame graduates.

Their gift is a component of the $1.5 billion Spirit of Notre Dame capital campaign. Announced last year, the campaign is the largest such endeavor in the history of Catholic higher education.