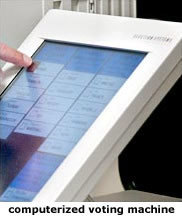 It is estimated that 80 percent of the votes that will be cast in Tuesdays hotly contested election races will be counted by computers. And given that these computers are coldly calculating and incapable of partisanship, we should trust the results, right?

Not so fast, my friend,said a group of high school students who competed for the University of Notre Dames 2006 Schubmehl-Prein Prize for the best essay on the social impact of computing. And a growing group of voting experts and activists are echoing their opinion.

In the wake of the frenetic 2000 presidential election with itshanging-chads,Congress passed theHelp America Vote Act,which set aside billions of dollars to replace punch-card and mechanical-lever voting machines with new systems such as optical scanners that read paper ballots and touch-screen voting machines.

The topic of the 2006 Schubmehl-Prein contest wasIs the Computing Technology for Electronic Voting Secure and Reliable Enough for National Use?Entries for the competition came from high school juniors throughout theUnited States, including entrants fromArizona,Kentucky,Michigan,Minnesota,New Jersey,New York,Ohio,Pennsylvania,TexasandVirginia.

The annual competition has a top prize of $1,000 and the competition is made possible by the endowment for the Schubmehl-Prein Family Chair in Computer Science and Engineering at Notre Dame.

A number of the entrants commented on the Help America Vote Act.

One of the contest winners observed that nearly all current electronic voting equipmentprovide(s) absolutely no voter verifiable paper ballot. This eliminates any possibility of a recount or audit of the vote.

The idea of a voter verifiable record is central to the concerns about the viability of electronic voting,Bowyer said.The idea is simplethe voter should see a record of their vote in printed form, so that they can know that their vote was registered as they intended, and that record should be kept for a possible manual recount.

The most obvious solution to assure the reliability of the electronic voting machines is to use a system where voter verifiable paper ballots can be used, produced and stored long after the election,said David Amurao of Damien High School in La Verne, Calif., the winning entrant.

In the end, high school juniors across the country are capable of assessing the state-of-the-art in electronic voting and they currently give it a failing grade,Bowyer said.The frequency of documented problems and errors is too great, suggesting a lack of care in producing the systems and a need for greater testing to ensure quality in user interface and security.

And a voter-verifiable paper record should be a requirement for all electronic voting equipment.

The concern and skepticism of the high schools juniors about electronic voting is being increasingly echoed by other political observers.

CNN analyst Lou Dobbs has frequently commented on the topic on his newscast and congressional hearings have examined the issue.

On Nov. 2, HBO premiered a documentary titledHacking Democracy,which cast doubt about putting too much confidence in electronic voting by suggesting the ease with which someone with enough computer savvy could change peoples votes.

And on the same day, the Wall Street Journal carried a lengthy piece in which Carnegie Mellon Universitys Michael Shamos, a computer science professor who has tested the accuracy of electronic voting machines and defended the method in high-profile legal cases, debated their reliability with Lawrence Norden, a lawyer at New York Universitys Brennan Center for Justice who has published research alleging security risk with the machines many states are using.