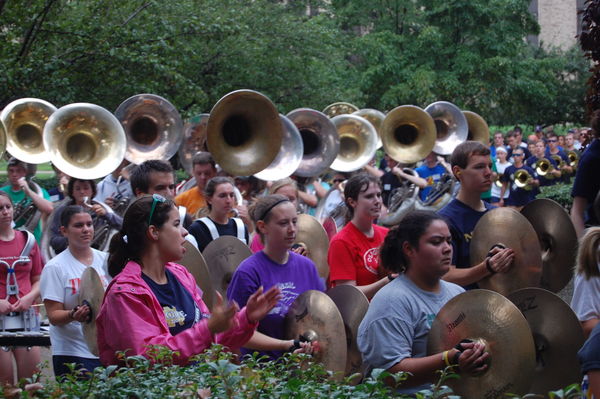 The University of Notre Dame Band kicked off its 164th year with a march-out around the Notre Dame campus on Aug. 20. Beginning outside the Ricci Band Rehearsal Hall, the march-out route took the band past several Notre Dame landmarks including the Hesburgh Library, Clarke Memorial Fountain and Grace Hall, concluding at Stepan Fields. One of the traditional campus events ringing in the beginning of a new school year, the march-out featured some 500 students, including veteran band members and students auditioning for a spot in the 2009 Band of the Fighting Irish. Dating back to 1845, the Notre Dame Band is the oldest college band in continuous existence in the United States and was honored as such by being declared a “Landmark of American Music” by the National Music Council and the Indiana Music Educators Association. Learn More